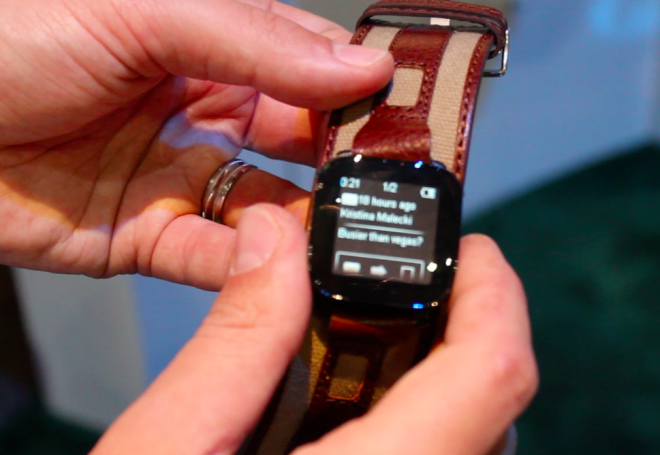 The Sony Ericsson LiveView accessory has been out in the U.S. for about a month, so thought we should check it out after spending some more quality time with the Xperia Play.

If you haven’t heard of it, the LiveView is a Bluetooth accessory wearable thanks to a clip on the back that connects to your Android phone, and displays pertinent data on its teeny 1.3-inch screen. For example, you can scan incoming text messages, flip through RSS feed news items, read your latest Facebook and Twitter updates, or control music playback on your Android phone. The LiveView is also open for third-party app developers to plug into, but there are only a couple of dozen so far. Foursquare’s there, in any case. You control the interface through a touch-sensitive bezel, and a button on one side.

LiveView only really strikes me as useful for the sporty types that can’t be fiddling around to pull out their phone. Professional drivers might need a bit more functionality than a Bluetooth headset can offer and might find LiveView an interesting option, but I have a feeling it would be just as distracting as any phone. App support is what will ultimately determine the real value of LiveView, but for now it doesn’t seem like an opportunity many devs are pursuing.

What do you guys think – would you wear a LiveView in public without any sense of dork-shame? It’s at least a little more realistic to use than, say, a Dick Tracey video call watchphone.