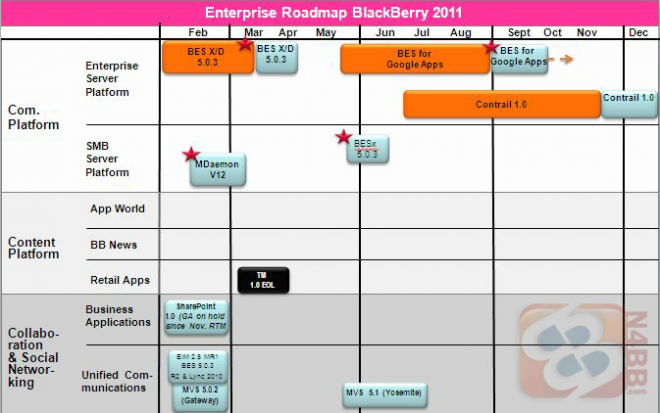 A leaked enterprise product roadmap from RIM is indicating that BlackBerry Enterprise Server for Google Apps Premier is being targeted for a September launch. This means corporate-grade e-mail, calendar, and contacts will sync up seamlessly between the Google services in the cloud and the BlackBerry phone in your hand. This is vaguely reminiscent of the Google Apps Connector, and I’m having trouble nailing down how it will relate to this new product, since I thought Apps was all in the cloud, but this slide is saying the new product will sit behind the firewall. Is one of the two products up in the cloud, and the other staying on a corporate server, or is BES for Google Apps replacing Apps Connector? Update: It looks like Apps Connector is being retired, and presumably this new service will take its place. Either way, here’s how the slide deck describes it.

Also on the map is BES Express 5.0.3 for late May, which will include support for encrypted attachments, Office 2010 attachment support, and a few other goodies.

For those not hooked up to a company server or using Google Apps, the standard BlackBerry Internet Service already has built-in wireless sync with Gmail contacts, calendar, and e-mail. If you’re looking for the signature Gmail functions, like labels, stars, archiving, and threaded conversations, you can download the dedicated Gmail app, or get the Gmail plug-in that soups up the native messages app appropriately. Even though we use Google Apps at IntoMobile, we don’t have a BES, so I end up forwarding my e-mails to my personal account and using the built-in BIS sync there (since Google Apps and BIS don’t play nice). Sometimes I have to use the Google Sync app to get shared calendars on my device, but it’s not too much of a hassle.

Internally, Research In Motion has been running a conference for their BlackBerry developers, talking a lot about how to speed...