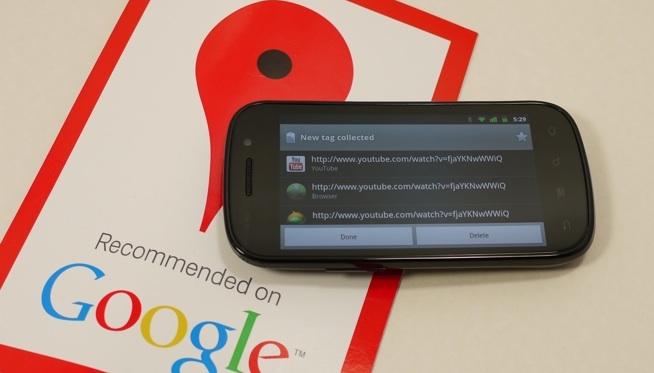 Chances are that if you buy a smartphone towards the end of this year, and most certainly in 2012, it’ll have a little chip inside that handles near field communication or NFC. Right now NFC is used for simple tasks like reading a tag, so instead of having to take a photo of a QR code you just place your mobile phone near a sticker and boom, there’s some data. In the future you’ll be able to use NFC to pay for things and it’ll eventually replace all those plastic cards in your wallet, but what else can the technology do? There surely must be more use cases beyond exchanging short snippets of text and buying a cup of coffee and “NFC Task Launcher” for Android aims to explore.

Joshua Krohn, the developer of the app, says: “Instead of only having the options to do things like launch a URL, call a number, open a map to a location or launch a single application, users can now create tags that perform a larger number of actions and can accomplish tasks that are currently not available in these types of applications like interacting with the hardware of the device or changing aspects of the configuration. You could have a tag that enables Wi-Fi, configures your wireless network and then connects — so visitors would never have to enter your security key to use your wireless connection. They would not need to have an open network, they would only need to scan the tag and the rest is done for them.”

It would be nice if all platforms had this type of application and we think this sort of stuff is going to come baked right into future versions of Android and iOS. What sort of things would you like your future NFC enabled phone to do?

HTC just dished out some invites to UK journalists for an event on April 12, with only the ominous directive...