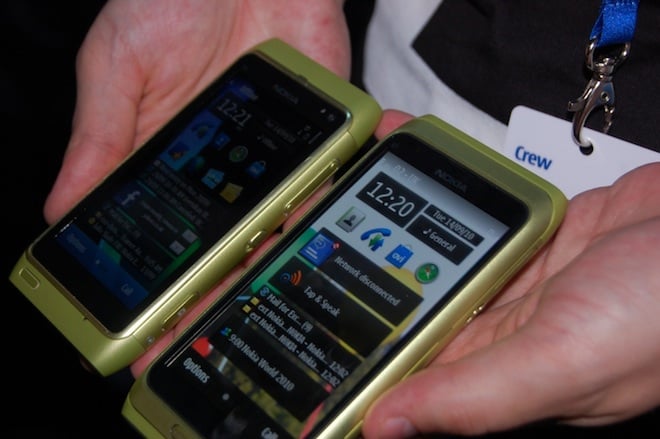 An unnamed Nokia Executive, in an interview with the Hindustan Times, has said: “We will be launching 40 models in 2011 of which at least 30% would be smartphones.” This news isn’t exactly making us bust out the champagne because that’s right around how many models Nokia has been releasing every year for the past 5 years. The Finnish firm has consistently told us that they’re going to take a “more wood behind fewer arrows” approach, meaning that they’ll come out with less new models, but said models would be further refined, but we’ve yet to actually see that materialize. Now we know you need a wide portfolio if your goal is to not only compete with Android and the iPhone, but to also “connect the next billion”, but 40 variants is a bit much. Take the Nokia N8, E7, C7, and as yet to be announced E6. They’re all the same device, expect one has a better camera, one has a QWERTY keyboard, one has a less capable camera, and one looks like a BlackBerry. Inside they’re all the same, they’re just different sizes and shapes. Why?

While we never expect Nokia to take the Apple approach and release just 1 new handset every calendar year, we do think they should release no more than 10 models every 12 months: 2 for the low end of the market with a bare minimum set of features, 4 or 5 mid range devices that come in a variety of form factors, and 3 or 4 high end devices that show off the best the company is capable of achieving. Maybe now that Stephen Elop is in charge he’ll do that. He’s already promised to reduce the amount of time between when Nokia announces a device and when it actually shows up on store shelves. It’s still too early in the year to see just how well he’s doing on achieving that goal.

Remember AR.Drone, that sexy-lookin' quadricopter we've first seen at last year's CES? Thus fur it was an iPhone thing only,...