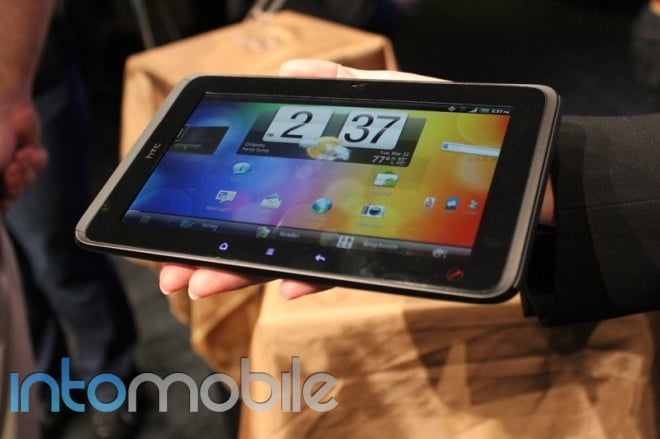 For those of you wondering what version of Android the Sprint EVO View 4G table would launch with, you can rest assured because the carrier is promising that it will land with Android 3.0 Honeycomb.

When we first saw the Sprint EVO View 4G at Mobile World Congress as the HTC Flyer, the 7-inch tablet was running Android 2.4 Gingerbread with the custom Sense UI on top. While some may have been disappointed it wasn’t the latest version of the platform, HTC likes to customize its phones with Google’s mobile platform and, at the time, Honeycomb was only available on the Motorola Xoom in its untouched form.

The Sprint EVO View 4G won’t be coming out until summer though, so that gives HTC plenty of time to build its Sense UI on top of Android 3.0 Honeycomb. The carrier is promoting the tablet as having a version of the platform that’s built for that form factor.

This won’t be the first time we see Android 3.0 Honeycomb get some custom skin, as Samsung just showed off the TouchWiz UX for its upcoming line of Galaxy Tab products. Samsung’s treatment of the platform is relatively light, so I’m interested to see how far Sense UI will go to change Honeycomb.

The Sprint tablet should be a solid device, as it features a 7-inch screen, a 1.5 GHz processor, 1 GB of RAM, 1.3 megapixel camera on the front for video calling, plus a 5 megapixel camera on the back, 32 GB of internal storage plus microSD support for an additional 32 GB, Wi-Fi b/g/n with hotspot and DLNA support for media sharing, and connects to both Sprint’s EV-DO 3G and WiMAX 4G networks. It also comes with a somewhat wonky capacitive pen that may come in handy if you love to annotate things or if you want to draw on your tablet.

Check out our hands-on video of the 7-inch tablet below.

[Update] Looks like the EVO View 4G will have Honeycomb but it’s up in the air if that will be the case at launch. The Sprint landing page has been changed and a spokesperson told Android Community: “Our plan is to offer Honeycomb, it’s just a matter of when. It’s too early to determine whether or not Honeycomb will be available at launch.”

This kind of makes sense because the TouchWiz UX was very light modifications of Honeycomb and I don’t think that’s necessarily intentional. Rather, I think it’s a timing and software issue. Sense is a large-scale re-skinning of the platform, so it may take more than a few months to get that going.

Samsung's Galaxy S line of devices have been very successful worldwide, which comes as no surprise to any of us....