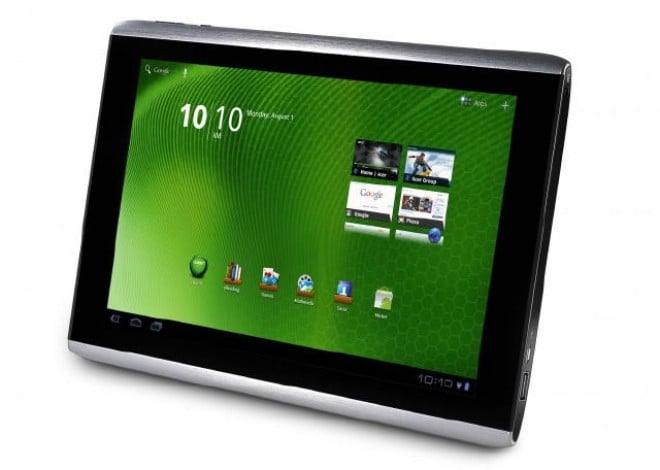 After months of saying it will happen, the Android Honeycomb tablet flood is actually beginning to take shape. One such tablet is Acer’s Iconia A500, which is now available for pre-order at Best Buy. What differentiates the Acer from other Android 3.0 Honeycomb tablets like the Xoom? Well, it’s reasonably priced.

Starting today, you can pre-order the Iconia tablet for $450, and can grab the thing in Best Buy stores on April 24th. The tablet boasts a very nice feature set, which includes a 10.1 inch display (1280 x 800), NVIDIA Tegra 2 dual-core silicon, front (2 megapixel)  and back (5 megapixel) facing cameras, HDMI port, 1 GB of RAM, and running on Android 3.0 Honeycomb, of course.  The tablet only sports 16GB of internal memory, but with the USB 2.0 port, you can easily add more memory through a flash drive. You can view 720p HD video on the tablet itself, and 1080p HD video when hooked up to a HDTV using the HDMI port.

While it won’t be the only Android Honeycomb tablet in this price range, it just may enjoy the distinction of being the most affordable Honeycomb tablet for the near term. Tablets like the Xoom and G-Slate ooze high-end features, but come with  a price that’s befitting a high-end piece of kit.  Everyone’s trying to compete with Apple, and while many tablets easily out-spec the iPad 2, the one aspect that will likely be a determining factor for the consumer is price.

The WiFi-only tablet won’t be alone for long, as there’s a 4G version in the works that will eventually land on AT&T shelves. We’ve also heard that the tablet may land on Verizon as well, toting LTE.  We can expect to see a price bump for the extra hardware, but it’ll likely remain competitively priced, even off contract. We could imagine that the 4G version may land somewhere near $550 off contract, but the subsidized price could possibly be yours for less than $400 when it debuts.

If you’re looking for a Honeycomb tablet sometime soon, the Acer Iconia A500 may be your best option if you don’t want to shell out the big bucks or sign a contract with a carrier.

Remember the Google Hotpot service that no one really uses? Well, it's going away as a standalone service and will...