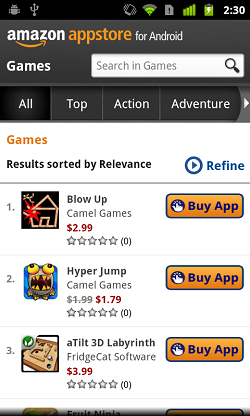 Many developers may be looking at the Amazon App Store as a way to get better revenues from Android but the International Game Developers Association is warning game developers that it may not all be sunshine and roses.

In a statement, the IGDA said (the bold is there emphasis):

Many journalists have noted the unusual nature of Amazon’s current store terms, but little has been said about the potential implications of those terms. In brief: Amazon reserves the right to control the price of your games, as well as the right to pay you “the greater of 70% of the purchase price or 20% of the List Price.” While many other retailers, both physical and digital, also exert control over the price of products in their markets, we are not aware of any other retailer having a formal policy of paying a supplier just 20% of the supplier’s minimum list price without the supplier’s permission.

The IGDA is pointing out five potentially negative things about this and this includes the fact that the Amazon App Store can offer steep discounts on prices, requiring all developers to never give another distributor an exclusive distribution window. Additionally, this may cause other markets to take this approach and the steep discounts may hurt niche and top-selling games.

These are all good points but there is another side of the equation: Amazon has a great infrastructure for selling things. The Amazon App Store has credit card information for millions of users and it will make purchasing apps a drop-dead-simple one-click experience similar to the iPhone. That could lead to more apps being purchased and it could help developers make up for discounts in price with volume.

There’s always going to be tradeoffs and the Amazon App Store is still in its infant stages. It will be interesting to see how developers react.

For a little perspective, the Apple App Store will take a clear 30% revenue cut from sold apps and in-app purchases. Apple has been known to carry a big hammer with developers but it has paid out billions to app makers over the last few years.