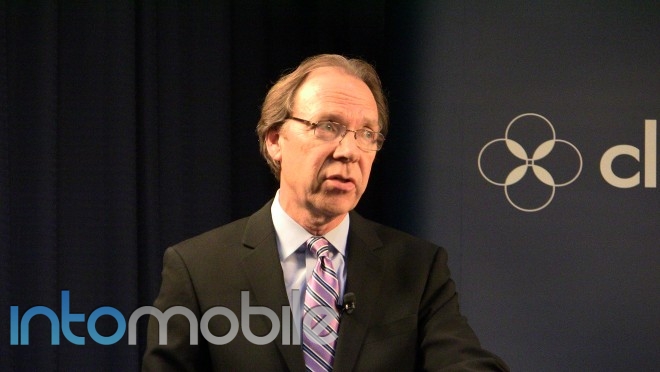 Sprint chief Dan Hesse today took aim against the pending AT&T and T-Mobile deal that could radically affect the US wireless landscape. Hesse took to the keynote stage at the ClimateOne conference in San Francisco to speak out against the proposed AT&T buyout of the Duetsche Telekom-owned T-Mobile, which we first caught wind of just before CTIA 2011 Orlando.

Fittingly, Hesse chose the day that the FCC kicks off its review of the “AT&T-Mobile” deal to formally announce that Sprint is unequivocally opposed to AT&T’s proposed buyout of T-Mobile USA. Sprint believes that, if approved, the deal would leave the US with a “duopoly” where two wireless carriers would control about 80% of the market in the US. “If AT&T is allowed to swallow T-Mobile, competition, innovation… will be stifled in the mobile industry,” Mr. Hesse explained.

The point here is that the US currently benefits from a striving and healthy wireless ecosystem that fosters competition, and in turn, innovation. In any fiercely competitive market, you get innovation that has the power to change society as a whole. “Competition is certainly why wireless has become the most transformative technology in decades,” said Hesse. And, the benefits of innovation, begotten from competition, aren’t just limited to the mobile technology. These benefits have affected virtually every aspect of our daily lives. “The downstream economic impact of a thriving wireless industry is undeniable.”

To be clear, the proposed deal will face opposition on more battlefronts then just Sprint. The deal, says Hesse, will likely affect businesses that manufacture and sell the technologies that make everything from a simple voice call to multi-tasked 3D gaming possible on a mobile phone today.

When asked if Mr. Hesse thinks it would be acceptable for Sprint to “hypothetically” buy T-Mobile and/or T-Mobile USA’s assets (cell towers, spectrum), the Sprint chief pointed out that the merging of Sprint and T-Mobile would really only make Sprint the third-largest carrier in the US – the same position Sprint maintains amongst the Big Four wireless carriers.

So, what does Sprint’s CEO think his chances are of preventing AT&T from buying Magenta? “It’s really up to the Department of Justice.”

We finally have a retail-ready BlackBerry PlayBook unit in our hands, so we decided to give it a quick unboxing...