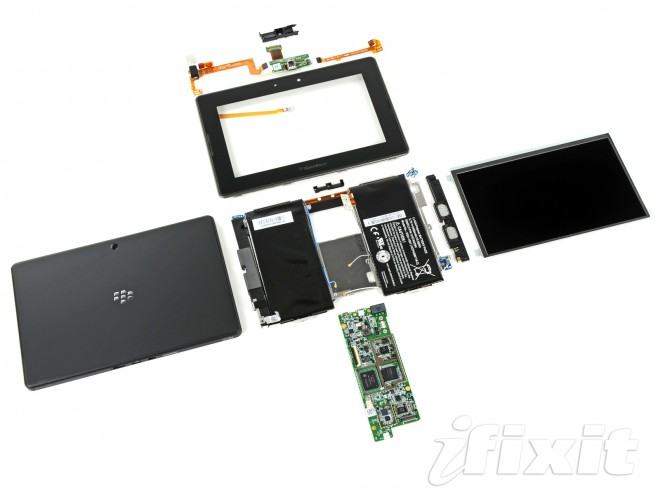 The BlackBerry PlayBook was released to the public yesterday, and it’s already been fully disassembled for inspection by some hardware experts. A lot of the components have come from Texas Instruments (not just the processor). From a repairability standpoint, the PlayBook is easy enough to open, using standard screws, but replacing the battery requires you to pull out the whole motherboard. The front display is a bit of a mixed bag in that the LCD and the glass cover aren’t glued to one another, but the outer glass is glued to a metal frame, which you’ll need a heat gun to remove.  Here’s a list of some parts identified in the teardown, if you’re into the technical nitty-gritty:

The BlackBerry PlayBook is RIM’s first tablet, and at very least has some pretty impressive hardware: a 7-inch 1024 x 600 display, dual-core 1 GHz processor, 1 GB of RAM, Wi-Fi a/b/g/n, GPS, and 3G when tethered to a smartphone via Bluetooth. Micro HDMI-out, a magnetic charging connector, and microUSB slot line up along the base, while brushed metal media and power controls are on the top. For an in-depth examination, be sure to take a look at my review.

ARM, the British firm that designs the chips that power just about every mobile phone on the planet, has said...