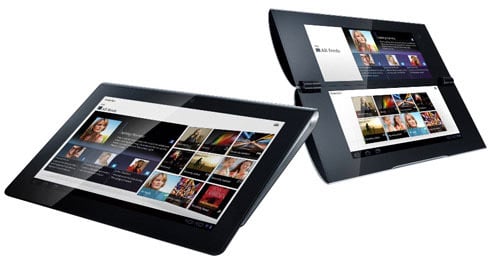 We told you Sony is working on its Honeycomb tablets and voila… they’re almost here. At the moment, the two devices — S1 and S2 — have been unveiled in Japan, but we assume they will be exported to the other parts of the world in no time at all.

The first of the two devices, S1, is a 9.4-inch Honeycomb tablet with a small curve at the top, resembling a folded magazine. It gets its power from NVidia’s Tegra 2 processor, while also rocking other “standard for a Honeycomb tablet” features like 3G/4G and Wi-Fi connectivity, sensors and we guess tons of built-in storage. Interestingly enough, it’s a PlayStation Certified device, allowing its future owners to enjoy PlayStation One games on it. Moreover, it also supports Sony’s Qriocity service, acting as a remote control for other Sony products.

The other tablet is S2 and it’s a clamshell-shaped device with two 5.5-inch touchscreens which can work either separately or as one big screen. In that sense we think of this baby as the Kyocera Echo on steroids. Specs include the same Tegra 2 processor, 3G data, some camera and so on.

Both the S1 and S2 will be launched in Japan by fall. Hopefully, the rest of the world won’t have to wait for too long afterwards…

HTC has updated its Sync software with support for two of their latest Android smartphones - Desire S and Incredible...