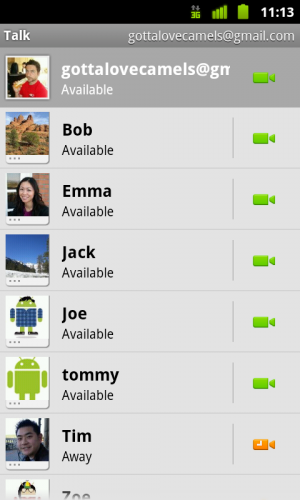 While there are plenty of video calling applications for Android, a native one that works with other Android devices, like tablets, or over Gmail is awfully useful. After all, you might want to have video calls with friends and family members who don’t own Android devices, but you’ll be able to video chat with them if they’re near a computer and use Gmail.

Thankfully, there won’t be any Wi-Fi limitations for this — it will work over your carrier’s 3G or 4G networks unless they purposely block it, and they’re well within their right to do so. It’s annoying, but let’s just hope this isn’t the case.

So, when is the feature coming to your phone? Depending on your software version, maybe never:

It might be a bit of a bummer, but many newer devices may end up getting Android 2.3 Gingerbread in the future, so don’t give up hope. Just don’t hold your breath.

To see more of video calling in Android, see the video below.

Motorola just reported its first quarter financial results and, despite what some analysts say, the Motorola Xoom hasn't been a...