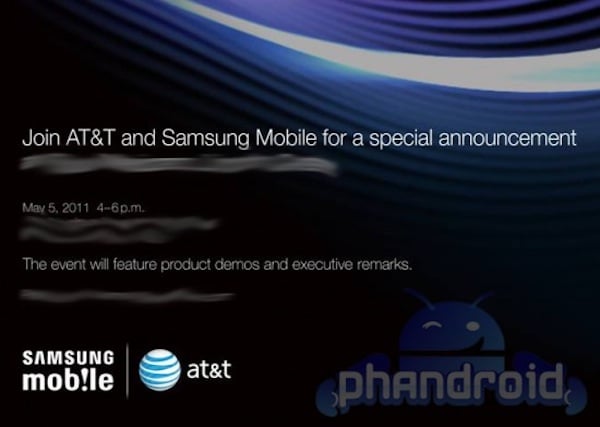 Samsung and AT&T are getting together on Thursday the 5th of May for a “special announcement” that will feature “product demos and executive remarks”. In other words, something is going to come out. We’re hoping that AT&T is going to bring the recently launched Galaxy S II to American shores. That 1.2 GHz dual core packing, 4.3 inch Super AMOLED Plus carrying, Android 2.3 running monster deserves to be man handled by the millions of smartphone addicts living in FreedomLand, some (most?) of which we happily call our readers. If it isn’t the Galaxy S II then maybe AT&T will announce that the Infuse 4G, which was launched at the Consumer Electronics Show back in January, will finally hit the market. And if it isn’t the Galaxy S II, nor the Infuse 4G, then maybe it’s one of the new Android Honeycomb tablets. If it’s all 3 then we’re ready to die and go to heaven, but we doubt we’re going to be that lucky.

This brings up a sore topic: unlocked hardware. If you really want any of Samsung’s latest devices, then they’re easily available from numerous online stores, but, and this is a big but, they don’t come with any subsidies. The Galaxy S II is going for $750 on Expansys, which seems a bit high, but it’s most likely due to the initial spike in demand from people who want to be the first on their block to have something. Those kind of folks would easily pay $1,000 for this handset. But imagine it was $600 for a moment, would you pick one up, knowing full well that AT&T has no right to say what you can and can’t do with your device, and you’ll also be the first to get software updates? It’s an easy choice for us, and why we recommend that if you want to go Android you should pick up a Nexus S.

As if we needed anymore confirmation about the name of the next version of Android, here you go. Ice Cream...