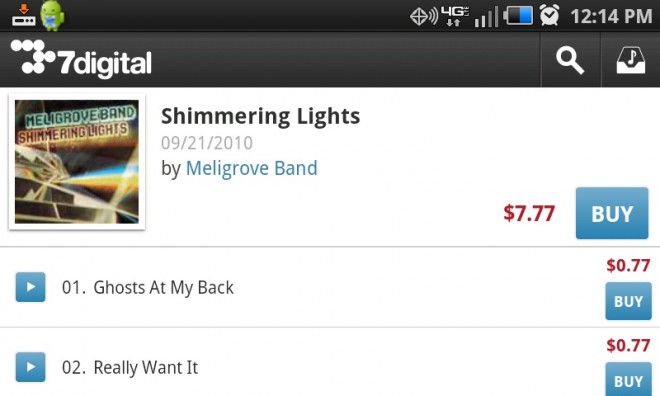 The 7digital Android app is trying to make a bigger dent in the mobile music market by updating the app to include the ability to purchase music over the air. The neat thing about this is that you’ll also be getting a digital locker for the tracks you buy.

I downloaded the 7digital Android app to my handy Samsung Droid Charge and it had a nice layout and multiple songs to buy. You do have to pump in your credit card number to the app once but after that’s done, it’s simple to buy tracks and albums with a few clicks. The store is also pretty cheap, as most tracks cost about 77 cents and many albums can be had for $7.77.

The neat thing about the 7digital Android app is that once you’ve purchased tracks, you can access these from a digital locker on any Android device. You do have to download the track to that device but it’s still pretty neat. When you combine this with the fact that this is the preloaded music store on the BlackBerry PlayBook, it’s a nice move for the company.

I guess the main competition would be Amazon and its Cloud Player app for Google’s mobile platform. I have to give the edge to Amazon though because this also includes the ability to stream tracks.

Additionally, the Amazon Cloud Player will let you upload your home music collection to the online storage and play or download those to your mobile device. You do have to pay for some of the storage but when you purchase an album, you get 20 GB of storage for free.

While some may still prefer the iTunes ecosystem with iOS, 7digital, Amazon and others are making Android a strong multimedia platform. We should also see a Google Music service hitting the streets soon, so that’s just another feather in the Android cap.

HTC is working hard to get its Android devices updated to Gingerbread as soon as possible, and the first two...