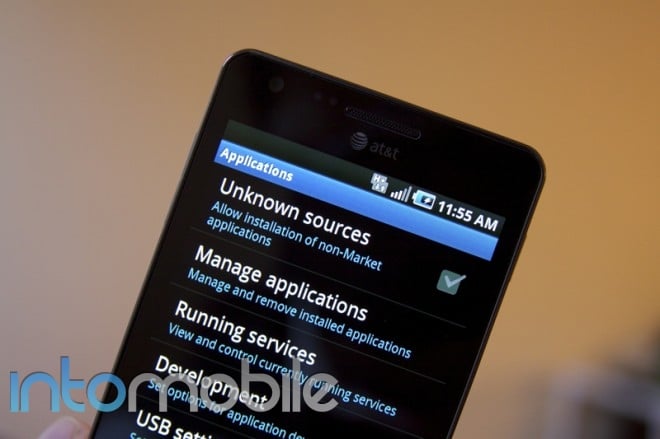 The Samsung Infuse 4G was given an official release date and price yesterday and we have been playing with it for a few hours and were surprised and happy to see that AT&T is allowing users to sideload apps. That’s a first for AT&T and I get the feeling that Amazon has a lot to do with this.

AT&T generally doesn’t allow its phones to install apps from outside the Android Market, although you can find ways around that through official software or through hacking. The carrier said this is because it is trying to secure its users and its network.

That’s kind of a cruddy excuse but the fact is that there hasn’t been a significant reason for AT&T to enable this. I’m sure the enthusiasts would love to sideload the latest version of Swype or other apps but these users represent a minority of users. The Amazon App Store changes things dramatically, though.

The Amazon App Store was launched a few months ago and it offers one, free premium app a day, as well as an integrated, one-click buying process for apps. This is the first real major competitor we’re seeing to the Android Market (excluding cross-platform markets like GetJar) and Amazon does carry a lot of weight with carriers.

AT&T previously said it was working with Amazon to enable its Android phones to sideload apps from third-party market places and it looks like the Samsung Infuse 4G will be the first device to launch with this capability. It’s unclear what will happen to the other AT&T Android phones but I would hope a quick software update would solve that problem.

I’m still digging the Amazon App Store and I visit it every day to download that free premium app. What do you think about sideloading apps, friends?

Tegra 2-optimized games are not as plentiful as we would like to see at the moment, but we're assured that...