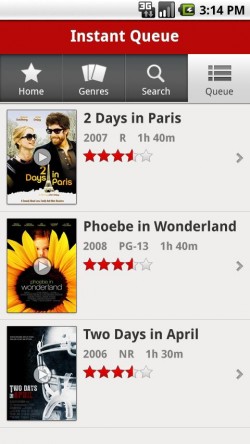 We were initially expecting the official Netflix application to debut alongside the release of the upcoming LG Revolution for Verizon, but it’s just been pushed to the Android Market. That’s great news, right? Well, according to the Android Market description, the app can only be used on five phones right now.

If you’re holding onto the Droid Incredible, EVO 4G, T-Mobile G2, Nexus One, or Nexus S, you can grab the Netflix application right now. Everyone else is currently SOL. This doesn’t come as a surprise, as we were told that the application would first be released on certain Qualcomm-toting handsets.

Netflix needs to step it up with this release, and get it onto more devices as soon as possible. We’d like to see the app hit NVIDIA Tegra 2 devices soon, as the Xoom and the Galaxy Tab 10.1 would benefit greatly from having Netflix on the go.

Netflix had this to say about future device support,

iPhone and Windows Phone 7 users have been enjoying Netflix for some time now, and it’s taken a very long time for the app just to hit the limited selection of Android handsets. This is because Android handsets vary greatly from one another, featuring different processors. Netflix has to test each Android handset to see if it’s up to snuff for its standards, so it may take a while before a large selection of supported devices are available.

Either way, we’re just glad to see that Netflix is up and running on some handsets at all right now.

We’re hearing that some custom ROMs aren’t able to use the application, so the best experience will likely be on a device running the original shipping software.

How’s your experience so far?