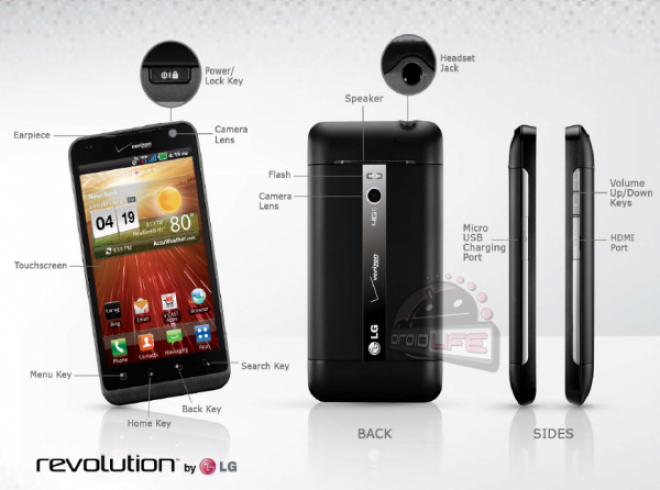 LG’s second high-end Android phone for the US, the Revolution, is set to hit Verizon next week on May 26th. This LTE-equipped handset will fit nicely alongside the Thunderbolt and Droid Charge, giving you three solid options for the blazing fast network.

The Revolution may not ship with a dual-core processor like LG’s first high-end phone in the US, the T-Mobile G2X, but that doesn’t mean it’s a chump. Sporting a 1GHz Snapdragon processor, 4.3 inch display (800 x 480), five megapixel camera with LED Flash, 1.3 megapixel front-facing camera, and HDMI out, the Revolution provides a good alternative to HTC’s and Samsung’s offerings on the Verizon network.

The handset will also be the first LTE handset to ship with Bing as the default search provider instead of Google, which is a bit disappointing to hear, but hardly a deal-breaker. We’ll also see Netflix pre-installed on the handset, bringing the device count up to six. Officially, at least. LG’s custom user interface is pre-installed on the handset, which is actually quite tolerable since the customizations are minimal. Still, the UI doesn’t bring much to the table, and we’d much rather use stock Android.

Launching alongside the Sony Ericsson Xperia Play and Motorola Droid X2, Verizon is launching three solid handsets that will certainly appeal many, each falling into its own niche. The Xperia Play will be for the gamers, the Droid X2 for the spec-junkies, and the Revolution will easily appeal to the data-hogs on Verizon. The triple-launch on the 26th puts T-Mobile’s to shame in every way, even if we do love the upcoming Sensation 4G.

With the LG Revolution just a little over a week away, Verizon customers have quite the selection of high-end Android phones laid out for them. Will you be grabbing the Revolution on the 26th?

Hey Canadians, jealous of your American bros down south with their fancy LG Android tablets? Stash that impotent dork-rage away...