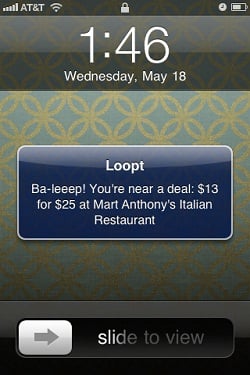 Fresh off its cool local questions and answers service, Loopt continues to improve by integrating with Groupon to alert users to nearby deals in the Chicago area.

The Loopt, Groupon deal involves tapping into the group buyer’s real-time stream to give users a head’s up when they’re near a deal. The Rewards Alert feature could really make the Groupon deals much more useful.

It’s easy to see how this could be a good thing. Let’s say there’s a deal on a restaurant near you at lunchtime and the Loopt app sends you a push notification. You buy the app through Groupon with a few clicks and are then dining at a discounted price a few minutes later.

While I’m not in Chicago, the integration appears to be pretty smooth. According to Loopt:

It’s easy, simply go into your Loopt settings and turn Reward Alerts on and let the money saving begin! You’ll start receiving your once-a-day, location-specific Groupon Now! deal alert… then you can use Loopt’s already existing features to notify your friends, plan an instant meet up and take advantage of these deals as they’re happening. If you fire up Loopt and scroll through places around you, you’ll also start seeing Groupon Now! icons in the mix. Click, buy the deal through your existing Groupon account, and you’ll be using the deal just moments later.

Groupon recently purchased the check-in company that makes Whrrl, so I’d expect it to make major moves in the real-time, location-based discount space on its own. For now, I think it’s smart to open up its deals to third-party providers like Loopt because it expands the reach.

Any readers out in Chicago want to try this out? Let us know what you think and how useful it really is in the comments below.

SPB Software is bringing its popular SPB Wallet to the Android community. Already available for Windows Mobile, iOS and Symbian...