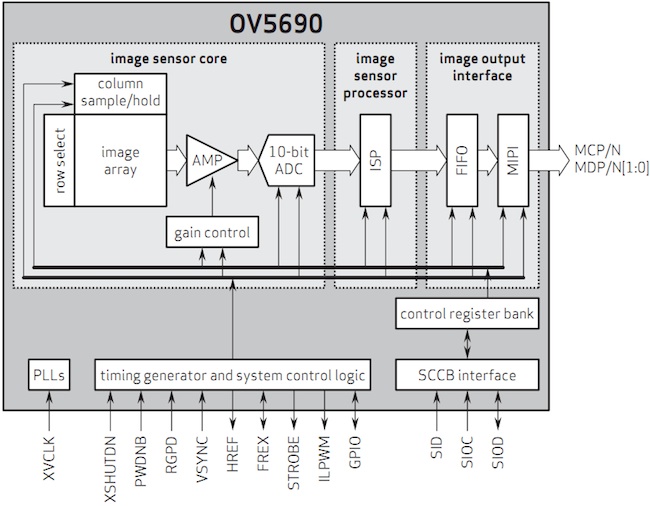 OmniVision, makers of the camera sensors that find their way inside many of the smartphones and tablets out on the market, have just announced their latest creation, the OV5690. We know, terrible product name, but here’s what makes it special: It takes 5 megapixel photos using a second generation backside illumination architecture, so low light should no longer pose a threat. It also captures full HD 1080p video at 30 frames per second, and if you’d rather have 60 frames per second then you can knock it down to 720p. And finally, the most impressive spec of all, the whole thing measures just 8.5 mm x 8.5 mm and is less than 5 mm tall. That makes the OV5690 about 20% shorter compared to most every other 5 megapixel sensor out right now. What’s this going to enable? Even thinner phones and, should a hardware manufacturer want to slip it inside a tablet, better video capture capabilities.

Considering the Samsung Galaxy S II is barely 8.5 mm thick and already packs an 8 megapixel camera sensor that does 1080p video recording, we’re wondering just how thin of a smartphone the OV5690 is going to enable; sub 7 mm perhaps? Best case scenario is someone finally figures out that it’s a good idea to invest in high quality glass to put in front of the sensor, which more often than not adds thickness, so why not start with something that’s thin anyway in order to maintain a sleek profile? Megapixels are overrated, something we’ve been saying for years. Just because you have more of them doesn’t necessarily make your photos better. It’s all about the optics, and in most cases the person behind the lens. Read a book on photography or watch a few videos on YouTube, and then maybe you’ll finally learn how to capture an important memory without making it blurry or over exposed.

When the first Amazon Kindle was released back in November 2007, no one thought that it would become the huge...