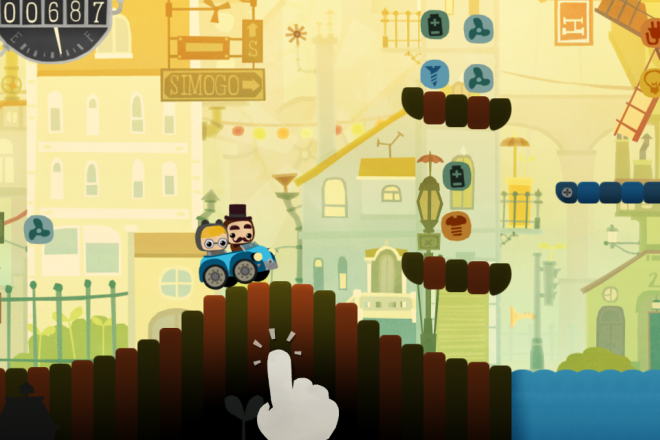 When it comes to playing games on my mobile devices, I tend to go for the more hardcore games like Rage, Infinity Blade, and Final Fantasy III than casual titles like Angry Birds and Tiny Wings. I do enjoy casual games from time to time, but I tend to enjoy a more deep and enriching experience out of my games rather than playing a game that only offers instant gratification. But from time to time, there’s a casual game that makes such an impression on me that I can’t help but play it over and over again. This time, the game that has me completely hooked is Bumpy Road.

Bumpy Road is a high-scoring game that has a married couple taking a drive. The further along their drive they go, the more points they’ll earn. Along their drive, they’ll come across some hazards as well as some platforms they’ll need some assistance getting to. That’s where the player comes in. In Bumpy Road, you don’t control the married couple, instead, you control the road they’re driving on. When you touch the road, it will raise up. You can use the road to either accelerate or slow down the couple on their drive, or you can pop the road from below them to make them jump into the air. 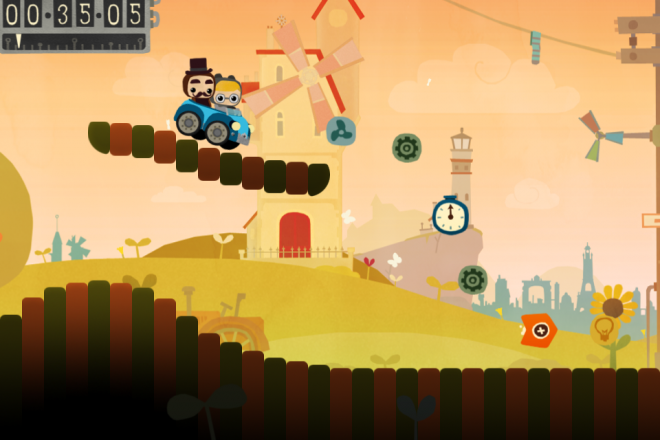 The game comes with game modes: Evergreen Ride and Sunday Trip. Both modes have levels that randomly generate each time you play, so there’s a high amount of replayability in the game. In Evergreen Ride, you drive until either you run out of gas or until you fall into a pit. Along the drive, you’ll be able to collect gizmos that are littered throughout your drive that will fill up your gas tank. When you collect enough gizmos, the game will reward you with a bonus road that has no hazards, just a ton of gizmos that can be collected to increase your point total. In Sunday Trip, the couple need to make it across the finish line at the end of the stage as quickly as possible. Unlike Evergreen Ride, there are no pits to fall into, so your main focus is to finish the level in as little time as possible. You can still collect gizmos as well as a number of supportive items, such as boosts and clocks to help improve your time.

One of the things that drew us into the game was its art style. The world that the married couple live in is vibrant and full of color. From the animation of the car, the road itself, and the background art is eye catching and beautiful. We also couldn’t help by smile as we played the game and noticed as the player touches the ground, the road responds with the sounds of toy piano keys sliding up and down along with the player’s impressions. There are a number of small quirks similar to those that make this game a delight to play each and every time.

FINAL THOUGHT: Bumpy Road is a fine example of taking a simple gameplay mechanic and running with it. It’s easy to understand and is a lot of fun each and every time the game is played.