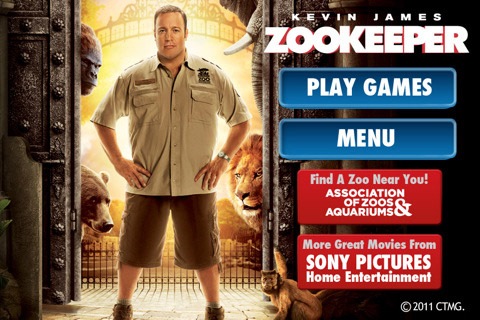 In anticipation of the release of Columbia Pictures’ summer comedy Zookeeper and as part of the marketing activities for the movie, the studio launched a new app for the iPhone, iPod and iPad users.

Available as a free download, the application features games starring animal characters from the movie. You can play as a monkey to collect bananas as he leaps through the branches, guide the giraffe to eat leaves on the trees before they fall to the ground, and keep the gorilla entranced with a swinging tire.

The U.S. version of Zookeper also comes with the fourth game featuring elephant. This part has to be unlocked either by achieving the top rank in the other three games, or by visiting a local participating zoo or aquarium accredited by the Association of Zoos & Aquariums.

Moreover, you can also earn achievements, badges and wallpapers themed to each animal via Game Center and share your progress on Facebook…

Finally in case you wonder, Zookeeper will hit theaters on July 8, 2011.

SongCatcher for iPhone is touted as the ultimate solution for songwriters

Mobile app developer John Vella unveiled a new version of its SongCatcher app, touting it as the "first fully functional...