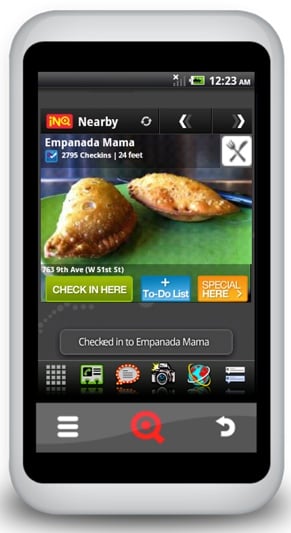 Foursquare and INQ have just announced a partnership that will have the location-based social networking service powering INQ devices. Foursquare capabilities will be integrated right into the device, and users will be able to do most of the things they can with the app: check-in, check for nearby places, read tips and more. But instead of having to fire up an application to do those things, the location-based services and its additional perks and features will be tightly integrated with Android software.

“We want the average consumer to really start to discover and explore location based Foursquare content,” say INQ CEO Frank Meehan. In addition to Facebook and Foursquare, Spotify is already integrated into the phone but only for European and Asian users. INQ and CloudTouch is still finalizing the deal with the US carriers now.

“These guys are trying to make the best phone possible,” said Crowley, “Foursquare integration is a logical step.”

We did catch a glimpse of what INQ has in store for its Facebook devices, but we’ve yet to see them in the U.S. The same goes with the devices that are integrated with Foursquare’s services, and Spotify, too. Initial rumors said that we’d begin to see INQ’s integrated devices on the AT&T network some time in 2011, and since there is plenty of year left yet, we just might see something soon, if we don’t hear any official announcements first.

INQ reminds me of what Helio did with MySpace, so I’d imagine these devices being targeted for the younger crowd or those who are major social networking and location-based-service addicts. If the devices are powerful and can hang with the rest of the big boys these days, like the Droid Charge or the Infuse 4G, I can’t imagine these things having any difficulty becoming a hit.

Remember Modu? The Israeli company that year after year showed off their concept of making a teeny tiny mobile phone...