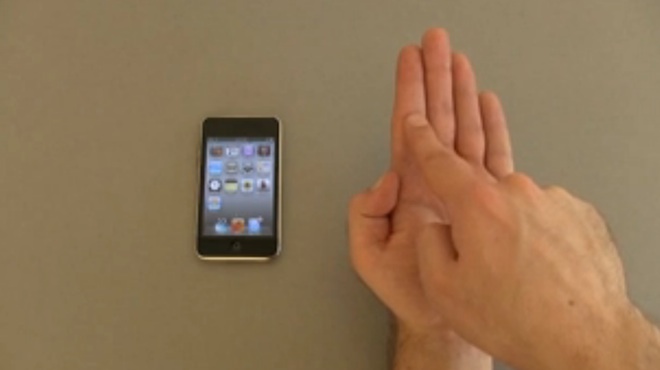 Do something often enough and it soon becomes second nature. Researchers in Germany are working on using that ability for us to commit an action to muscle memory to design an interface [see video here] that doesn’t require any screens, just the palm of your hand. Take for example receiving an incoming call. If you’re in the middle of doing something, then it’s a pain to dig through your pockets and start tapping on a piece of glass when all you want to do it mute your handset. What if you could just hold out your hand and tap the right side of your palm, similar to how you already tap the “Decline Call” button that’s usually on the right side of your mobile phone? It sounds wild, and we’re not exactly sure how it’s going to work in the real world since it’s going to require some sort of camera embedded inside a pair of glasses that you have to wear at all time, but at least we know there are people out there thinking about what’s going to come after touch based user interfaces.

What’s more likely going to happen over the next few years is that we’re going to start talking to our electronics. Google has already become a pioneer in this space by letting Android users forgo using an onscreen keyboard and just use speech as an input method in any text field, regardless of app. Rumor has it that the next version of iOS, due to be shown off in 2 weeks, will also feature the same sort of abilities. Microsoft doesn’t yet have speech inside Windows Phone, but said feature is also rumored to be coming to their “Mango” update due out later this year.

So instead of waving our arms around like lunatics we’ll be talking to ourselves while walking down the street. Brilliant.

In its latest study, In-Stat is focused on (non mobile phone) connected devices. According to the research company, mobile operators...