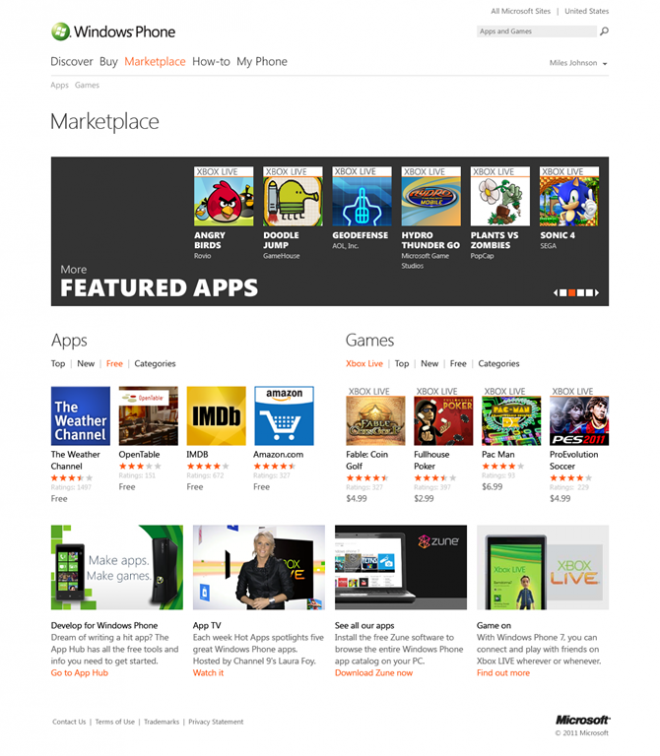 As Microsoft starts putting up the shutters on their Windows Mobile app marketplace, a fresh browser-based store is in the works for the upcoming Mango release. The web store will host the usual fare, like reviews, screenshots, purchasing, searching, and parental controls. Marketplace apps can be shared via e-mail, Facebook or Twitter. Once you buy an app (which is billed to the credit card already associated with your Windows Live ID) the app can automatically start downloading over the air on your phone. Kind of neat, and better than RIM’s clunky USB installation in their web-based app store.

Although the Windows Phone app scene is younger than webOS, Microsoft has managed to outpace it with over 18,000 titles currently available. That’s even starting to horn in on BlackBerry App World’s 20,000-ish (as of February), though RIM is likely to pull ahead once they start accepting Android apps for the PlayBook.

A web presence is really great for discoverability, especially when blogs like ours need somewhere to link to when talking about all of the cool new apps coming out.

For awhile, mSpot has been storing music in the cloud and allowing users to stream it to their phones through...