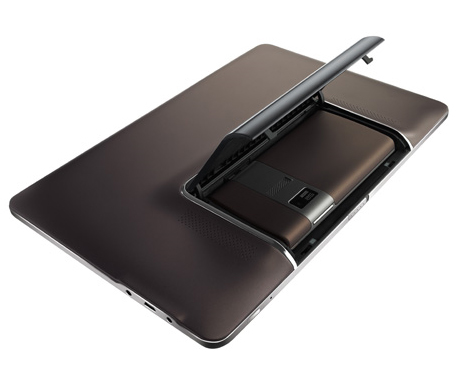 Today at the Computex conference in Japan, Asus has announced an interesting new tablet called the Padfone. Yeah, the name leaves a lot to be desired, but the fact that it has a dedicated cavity where you can plug in a custom-made smartphone gives it a unique twist. Once plugged inside the tablet, the Padfone can use the handset for 3G connectivity, and supports core functions of the phone on the big screen, such as taking calls. The second device also effectively extends battery life of your phone. Though software and hardware specs haven’t gone official yet, there will be some kind of video conferencing capabilities on there, and the promotional videos show the tablet will at least be running Android 3.0 Honeycomb, if not Ice Cream Sandwich. The tablet looks like it will be in the 10-inch range, while the phone will be in the neighbourhood of 4 inches.

It’s clear that the Padfone is borrowing a lot of the BlackBerry PlayBook’s philosophy of tightening the relationship between smartphone and tablet, only Asus is going about it in a much more direct way. It’s a cool idea, but the last time Asus got into the smartphone game it was with Garmin, and as novel as their navigation-centric brainchild was, it didn’t do particularly well. Does the Padfone stand a better chance, or is it just as gimmicky?

We’ll keep an ear out for more details, but in the meantime, here are some hilariously awkward promo videos.

Roughly 5 months ago Motorola announced the Droid Bionic for Verizon. The press materials said it would pack a dual...