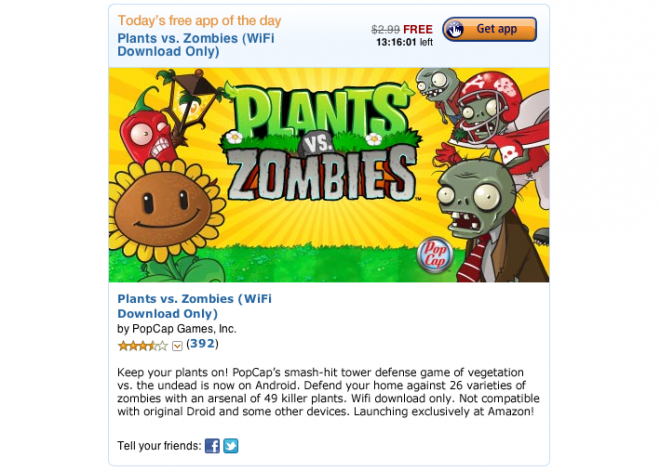 Earlier this year, we attended a super secret PopCap Games event in New York City to see some of their upcoming titles, one of which was a very early version of Plants vs. Zombies running on a Nexus One. Well, Android users – it looks like your day has finally come for some PopCap Games lovin’ as one of its most popular games to date, Plants vs. Zombies, is now available for Android.

Since you all have been waiting so (im)patiently for Plants vs. Zombies to be made available on Android, PopCap Games has made the game completely free for 24 hours from the game’s launch, which was at midnight earlier this morning. If you’re too busy to snag a free version of the game today, then you shouldn’t worry about the game breaking the bank as it’s selling for only $2.99, which when you consider how many hours of enjoyment you’ll get out of the game, is a complete steal. Plants vs. Zombies will be completely exclusive to the Amazon Appstore up until June 14th, after which the floodgates will be open and the game will be made available on the Android Marketplace.

If you’re an Android gamer, whether it be hardcore of casual, you need to play Plants vs. Zombies. It’s by far one of our favorite games on the iPhone and iPad and we’re excited Android users are finally getting the love they deserve from PopCap Games. We’re just hoping PopCap keeps it up and offers more of its amazing titles on Android. C’mon Peggle and Bejeweled 3!

iWork, a collection of iOS productivity apps including presentations, word processing, and spreadsheets launched with the original iPad, are now...