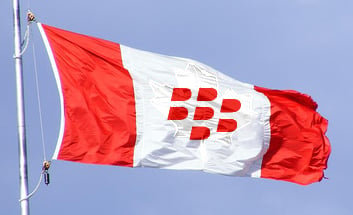 Call it home turf advantage if you must, but according to comScore’s latest survey, Waterloo, Ontario-based Research In Motion has planted a BlackBerry into the mitten-clad paws of 42% of Canadian smartphone owners. Apple trails at 31%, with Android at 12%, Symbian at 6.4% and Windows Phone/Mobile at 5.1%. On a comparative basis, Canada’s smartphone penetration actually sits above the U.S., France, Germany, and Japan at 32.8%.

comScore’s study also looks at mobile activities; over the span of a month, 64.5% had sent a text message, 48.9% had taken a picture, and 40.6% used an app. Despite BlackBerry taking the lead in market share, e-mail only accounted for 29.7% of activity.

It’s interesting to see BlackBerry take such a significant lead when just south of the border, Android is pulling similar numbers. From personal experience, I’ve seen a lot of my friends get their first smartphone this year, and across the board, it was pretty much all Android. I’ll be curious to see how (or if) comScore’s figures change in a quarter or two.

ooVoo has been impressing us with their ability to cram up to six callers into a mobile video call, but...