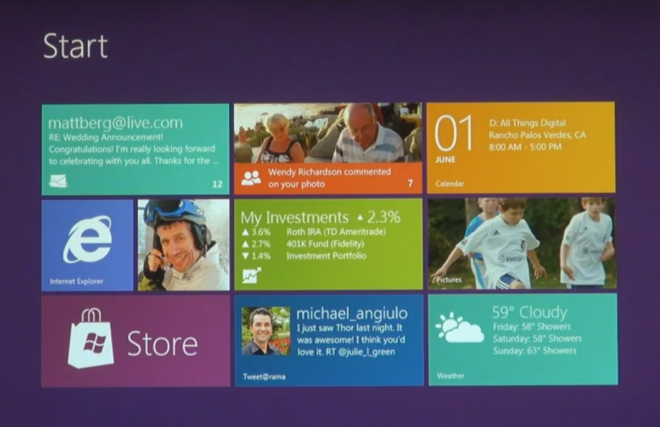 Many have been waiting to see what Microsoft will be doing with its latest version of the Windows operating system and we just found out. Unsurprisingly, the demo shows a very Windows Phone-like UI that looks great, but apparently only for certain applications.

The user interface looks like a radical change from the standard Windows desktop that most of the world is used to seeing, but that familiar desktop is still hiding right underneath. Some may not like the thought that the new Windows 8 UI is nothing more than a skin on top of the existing OS, but I like the idea, especially when we’re talking tablets. Windows itself may not be the best tablet OS, but it’s still functional, and having both is a must for some.

Of course, there’s certainly more than the UI to Windows 8, and this version will be able to run on ARM processors, opening up a wealth of possibilities. While it wasn’t announced or demoed, we’re just waiting for Microsoft to come clean about the Windows 8 marketplace that’s bound to happen.

Here’s a handful of features you can expect to see in the next version of Windows:

Luckily enough, many existing Windows machines will be able to run version 8, but we’d imagine that one must be running Windows 7 as a prerequisite. If Windows 8 is essentially an application running on top of the desktop OS then the hardware requirements to run it should be minimal.

In no way are we surprised that Windows 8 looks like Windows Phone 7. Microsoft has done a good job of distinguishing itself in the mobile landscape with its latest reboot and it only makes sense to make the desktop interface look similar. While this is still very much a work in progress, the latest version of Windows should be much better as a tablet OS than what it is today.

We’re still not sure as to when Windows 8 tablets will actually come to market, but they will likely come in force.