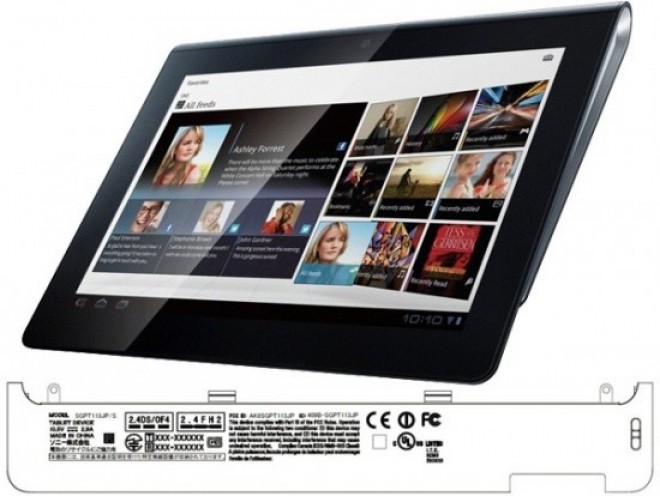 One of the two upcoming Android Honeycomb tablets from Sony, the S1, has passed through the FCC. The 9.4 inch tablet looks to have all the bells and whistles we’ve come to expect from it, but this time around it’s toting AT&T bands and HSPA+ support.

While having AT&T support within one of the models is certainly exciting, we also need to leave room for the fact that the particular model could be for Rogers in Canada instead. That’s not to say that we won’t be seeing the tablets this year, as both the S1 and S2 should be available in the US before year’s end. We won’t go through all the boring crap you can find in the FCC filing, but the S1 potentially shipping with AT&T HSPA+ support sounds like a good deal if you ask us.

Both of the upcoming Sony Android Honeycomb tablets will be gaming-centric and Playstation-certified devices. Expected to ship with a NVIDIA Tegra 2 dual-core processor, the S1 won’t be in short supply of raw processing power and we can expect to see the Playstation Suite games to play just as smooth as you’d see them on the console. You’ll find all of the goodies you’ve come to expect from a high-end Android Honeycomb tablet of today, like WiFi, Bluetooth, USB port, etc., and Sony will be customizing the Android 3.0 UI experience with its own skin.

While the tablet market may still struggle to find a real use case in the world other than a few niche cases, Sony marketing its tablet as a gaming device, which is smart. While Apple has seen a huge success with its iPad, scaling up mobile applications likely isn’t a huge challenge. Sony is looking to bring console games to mobile, bringing the world an option that has never been available to users before, Xperia Play notwithstanding.

Does the fact that the S1 is aimed at gaming make it more appealing to you, or does it make you think that Sony is trying to get more attention out of its tablets when its the same as the rest?

If you do want to sift through the filing, hit up the FCC links below.

If you're looking to hop on the Windows Phone bandwagon, you now have another option on AT&T because the HTC...