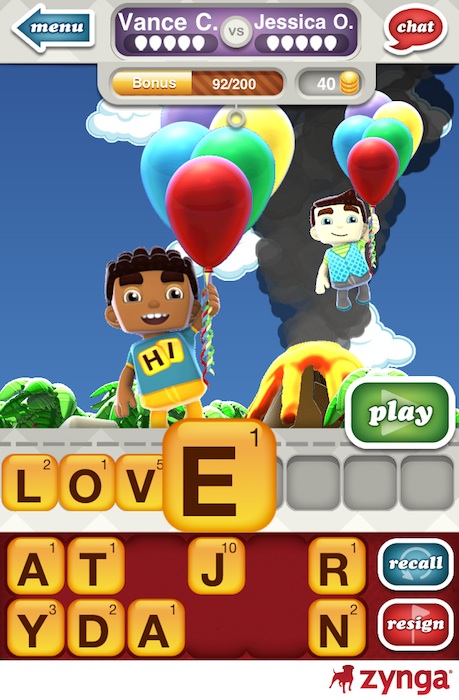 Zynga, who is quickly building themselves a reputation as a leader in the mobile games area, has just launched “Hanging with Friends” for iOS. It’s a modern take on the classic game of Hangman that many school children play today, or at least we still think they’re allowed to play since the potentially violent associations one can make with “hanging” a “man” can make worried parents start protesting that their local schools are breeding social misfits. Anyway, there are two versions of the game, one is free, but ad supported, while the other is just $0.99. Push notifications are used to signal when it’s your turn to guess a letter, and you can play up to 20 simultaneous games. The better you are at the game, the more coins you can get, which can be redeemed for things like the chance to make more guesses. If you’re terrible at the game, you can buy said coins via an in app purchase. Capitalism at its best.

We’d like to review the game, but for some odd reason it isn’t showing up in the App Store, despite the official Zynga blog saying that it launched today. Regardless, that’s not important, since we’re going to encourage that people actually get together and grab some pens and paper and play Hangman the old fashioned way. Your friends and family may think that you’re odd, asking them to play something that’s a relic of the past, but they’re the same type of people who wouldn’t bat an eyelid if you showed them this app on your phone, and they’d probably even want to purchase it themselves. Half the fun of Hangman is taunting your opponents with vulgar language and puzzling facial gestures, which is something this bright, shiny, sterile app can’t reproduce no matter how advanced our technology gets.

The Financial Times refuses to give Apple their 30% cut, launches iOS optimized website

Something important is going to happen at the end of this month. Newspapers and magazines currently offering iPad and iOS...