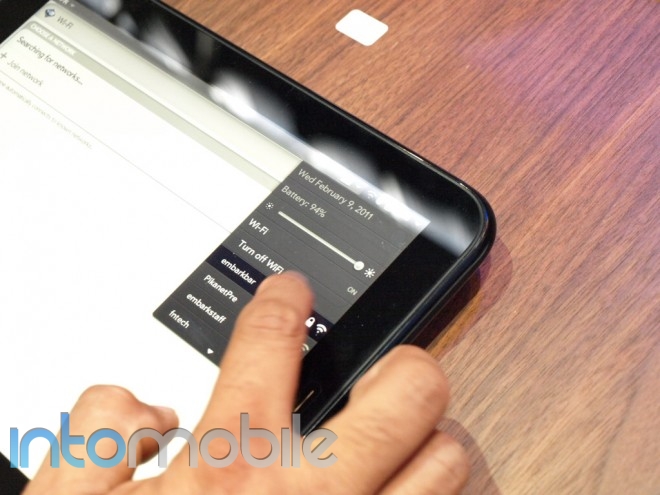 HP’s first webOS tablet, the TouchPad, was announced just before Mobile World Congress, and though not much has been said about it since then, the Wi-Fi version will be ready to go on sale July 1 in the U.S, with preorders starting June 19. Prices are more or less what you’d expect for a tablet these days: $499.99 for the 16 GB model, $599.99 for the 32 GB model, available through the usual retail outlets, like Staples, Best Buy, Wal-Mart, Home Depot, Amazon, and others. The UK, Ireland, France and Germany will have availability shortly after, and Canada won’t be far behind, launching on July 15. Italy, Spain, Australia, Hong Kong, New Zealand and Singapore are scheduled for a launch later this year.

The HP TouchPad has a spec line that lines up pretty nicely with the competition: a 9.7-inch 1024 x 768 touchscreen, dual-core 1.2 GHz Snapdragon processor, 1 GB of RAM, front-facing 1.3 megapixel camera, Wi-Fi, Bluetooth, and a 6300 mAh battery. It runs webOS, which was originally cooked up by Palm prior to their acquisition, which is best known for supporting web-based programming languages for developers, its use of gestures in the UI, and integration with social networks in the address book. One particularly cool feature being launched with the TouchPad is Touch to Share, which lets you transfer web pages you’re visiting to and from a webOS phone simply by tapping it on the front of the TouchPad. Like previous webOS products, the TouchPad will also be able to charge wirelessly through an inductive rear cover and a Touchstone dock. For a closer look, be sure to check out our hands-on, and note the similarities with the BlackBerry PlayBook.

The biggest competition the TouchPad will have is the Samsung Galaxy Tab 10.1, which just launched yesterday, and is currently the top dog in the 10-inch Android tablet sphere. While the iPad 2 is a bit older, it’s still selling like hotcakes, and will set the bar high for the TouchPad. With the TouchPad and Veer out of the way, the only next-gen webOS device we’re waiting on is the Pre 3, which we’ll probably see in time for the back-to-school season.

For more info on preordering the first webOS tablet, hit up HP’s site.

Apple changes subscriptions options, publishers no longer have to use App Store

In 3 weeks Apple's new guidelines for in app purchases are due to go into effect and section 11.13 of...