In September 2010 Nokia got a new CEO, Canadian born and bred Stephen Elop. His appointment was controversial because of his former role as the Head of Microsoft’s Office Division. Questions began to arise as to whether or not Nokia would switch to Windows Phone and if Elop was nothing but a mere Trojan horse. Less than 6 months into his post, in February of this year, our worst fears were realized when Elop got on stage at an investor event in London and said that he’s going to put Symbian on the shelf after about 100 million more units ship (roughly 1.5 years), kill MeeGo, and bet the future of the company on Microsoft’s Windows Phone platform. During that announcement he also revealed that Nokia was considering going with Android, but that in the end they felt that it would be too difficult to differentiate in an already saturated market. What would such a hypothetical device have looked like? Thanks to a leak coming out of China, now we know: 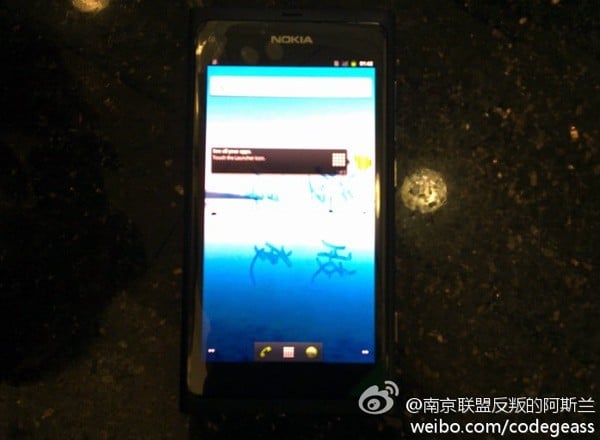 Now the design itself should look familiar to you, it’s the N9, which will also be used as a template for the Sea Ray, the first Nokia Windows Phone. This shouldn’t come as a shock since the hardware and software teams at Nokia are two distinct units, and recycling designs is done in order to save money. From the size of the text and icons on the screen it’s obvious that this wasn’t yet optimized, but it does offer a glimpse into a future that could have happened. We don’t buy Elop’s “difficult to differentiate” line one bit. We think Nokia wanted to have a say into Android’s roadmap and probably a cut of Google’s advertising revenue, at which point Google showed them the door.

Anyway, we know the hardcore Nokia fans will buy Nokia hardware regardless of the OS it runs, but we can’t help but think about how awesome a pentaband 3G, N8-like camera, Android smartphone from Nokia would have been.

Motorola Triumph for Virgin Mobile available for pre-order at Best Buy; $300 and shipping next month

For all the bleeding edge smartphones we cover on a near 24/7 basis thanks to our international staff, it's the...