As Apple iPhone users continue to get ignored when it comes to improvements to the Google Maps application bundled in iOS, Google just keeps on delivering new releases of Maps for Android, and this latest version (5.8) promises to not only make your checkin experience more fluid, but also help you find awesome places near you based on photos people have taken and shared. With Google Maps 5.8 if you want to checkin to a place that isn’t in Google’s already massive database of points of interest, you can quickly add it based on the name of the business and some magic sauce from your favorite search company. Once you’re checked in you’ll also be able to upload photos of that place which other people can then browse through. So say your meal at a new restaurant in town looks absolutely delicious. Before inhaling it and getting food all over your face, do the world a favor and take a quick snap. The last new feature, and our favorite, is easier management of “My Places”, which is a fancy way of saying locations you’ve bookmarked. Find out where that used record store is on your laptop, favorite it, and then boom, it’s automatically on your phone. This feature has already been there for a while, but it’s been a pain in the ass to access. Now it’s as easy as two clicks. 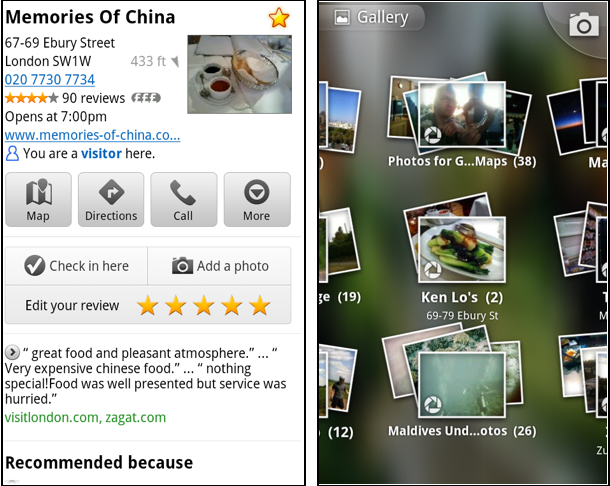 Back to iOS users, when exactly are they going to get these great new features? We know Apple and Google have beef, but that shouldn’t stop Apple from trying to keep their mapping experience on par with what Larry and Sergey have brewing in the labs. Maybe the rumors are true, maybe Apple is working on a replacement for Google Maps. If that’s the case then all we want to know is where the hell is it?!

RadioShack now takes pre-orders for the Motorola PHOTON 4G; Could be yours for $179.99

If you happen to want Sprint's Motorola Photon 4G badly and can't wait for the very end of July, nothing...