Verizon will be stepping up its game on the LTE front in the coming months, with virtually every new device supporting the blazing fast network.  We’re already seeing some follow-up handsets for phones that haven’t even been out a full year at this point, as well as some new devices we’ve never heard of.

The month of September kicks off with a couple of Pantech devices, the Breakout and the Jest 2. With the exception of the 9/1 launch date, there’s little else known about these handsets but we do know that neither will be showstoppers. No offense, Pantech.

On September 8th, Verizon will be giving the world a LTE assault, launching four LTE devices on the same day. One such device is the Motorola Xoom, so we could imagine that the LTE version will launch at this point, if it’s not the beginning of the LTE upgrade process.

We’ll also see the BlackBerry Curve 9370 land on the same day, making it the first LTE-enabled BlackBerry device to date.

Possibly the two most exciting handsets to launch on the 8th are the Motorola Droid Bionic and the Samsung Stratosphere. While unconfirmed, we wouldn’t be surprised to find the Stratosphere end up being the Galaxy S 2, or Function. We certainly hope this is the case, as there’s no other Samsung handset in the expected time frame that could be the Galaxy S 2. 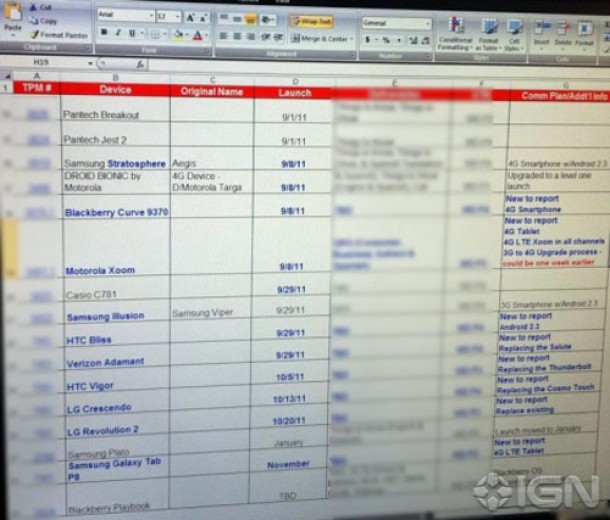 The Droid Bionic – the new and improved version, is the handset many people have been waiting for. Unfortunately, the biggest draw of the handset was its dual-core processor paired with Verizon’s LTE, and now with the 4G-toting GS2 presumably launching the same day, the Bionic isn’t as alluring as it once was.  That said, we have trouble believing that the handset won’t do well.

The end of September will bring a couple of more handsets from Casio, HTC, and Samsung.  On the 29th, Big Red will launch the Casio C781, which is all we know about the handset. We’ll also see the debut of the female-oriented HTC Bliss, and the Samsung Illusion, a 3G only, Android Gingerbread handset.

Early to mid October will bring Verizon customers some interesting hardware, great and small. The LG Cosmos Touch will be replaced by the LG Crescendo, which we wouldn’t be surprised if it was bumped up to an entry-level Android device when it debuts.

October will also bring us the replacements for the HTC Thunderbolt and LG Revolution in the form of the HTC Vigor and the LG Revolution 2. While it’s very soon for both handsets to replaced so soon, the existing offerings could have been placeholder’s for the better LTE radios. Guess we’ll have to find out in October.

One device that we have no guesses about is the Samsung Plato, which has been pushed to January of next year. However, the Samsung Galaxy Tab P8 should land sometime in November, with LTE in tow. We can only imagine (and hope) that this will be the 8.9 inch version of Sammy’s latest tablet line.

So there you have it folks. Who’s excited?

comScore: Android now 40% of US market

Not long after hearing that almost 50% of the global smartphone market is owned by Android, it's less of a...