AT&T, who was recently identified as the worst wireless operator in the United States by J.D. Power, hasn’t officially yet turned on their 4G LTE network, but that hasn’t stopped two technology journalists from discovering that Chicago residents, using the 4G LTE enabled AT&T Elevate WiFi hotspot, can hop on this as yet to be launched network and run some speed tests. The first set of results, from The Boy Genius Report, have download speeds topping out at around 13 Mbps and upload speeds getting close to 2 Mbps. The second set of results, from This is my next, are a bit slower, coming in at 6 Mbps down and 2 Mbps up. To give you some comparison, using the T-Mobile Rocket 3.0, which is capable of maxing out T-Mobile’s current 42 Mbps HSPA+ network, download speeds are around 25 Mbps down and 3 Mbps up, but of course you have to be in one of T-Mobile’s coverage zones. You’ve also got to wonder why AT&T can’t get the kind of numbers Verizon Wireless can pull with their 4G LTE network, which consistently delivers speeds over 20 Mbps down for most folks, and by the way, their network covers over half of the American population.

With those numbers in mind, I’d like to share some speed tests of the 4G LTE network that I’m currently testing here in Helsinki, Finland. Like AT&T’s network, the one I’m using right now, built by DNA Finland, isn’t yet live. I’m fortunate enough to be one of some 200 odd people who are testing the network. From my office I get 2 bars of signal and can pull nearly 45 Mbps down and get close to 10 Mbps up. Now the folks at This is my next said the speeds they got were with just 1 bar of signal. Using the famous “iPhone 4 death grip”, I covered my modem with the palm of my hand until I got down to 1 bar and ran another speed test. 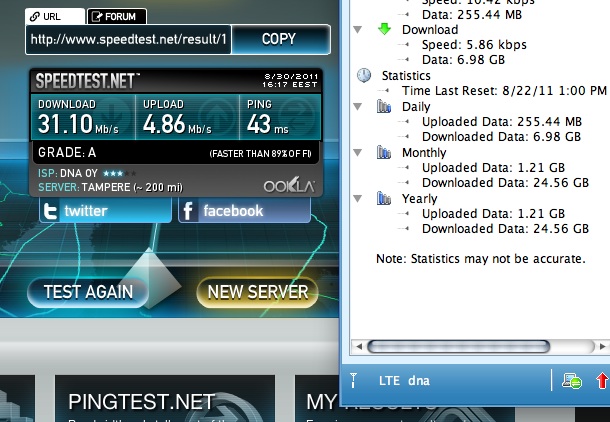 Update: AT&T hit us up and said it may not be fair to compare these speeds to Verizon right now because AT&T’s 4G LTE network is in testing mode. Fair enough. Once it launches though, it’s all fair game. — Marin