Note: This Siri review can also be found in the iPhone 4S review. 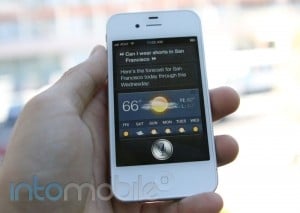 There are times where the Siri voice-controlled personal assistant really blows my mind and feels like the beginning of a new age in how we interact with all of our computing devices. For real. The simplicity, beauty and polish of it means that it will probably resonate with more users than Google’s Voice Actions or even something like Vlingo, which has been doing a great job on its own on similar voice-controlled tasks. Unfortunately, I believe that Siri is more sizzle than steak at this point and it only delivers on a fraction of its enormous potential.

Basically, Siri is trying to be your personal assistant on your phone that you interact with using natural language. Instead of yelling pre-defined prompts at it, you can simply hold down the home button until the icon pops up and say something like, “Tell Jamie I think we should grab a drink later.” It’s intelligent enough to comb through your contacts and it can transcribe your words to compose the text message. You can also tell it to set a reminder for you about getting this drink or put it in your calendar – if it conflicts with another appointment, Siri will tell you about the conflict.

It’s not just about being able to use your voice to send texts, e-mails or even to play music, or even having your messages read to you, as we’ve had those capabilities in smartphones for a long time but where Siri shows its massive potential is delivering answers to questions you pose using normal language in a natural way. The examples Apple shows off are things like, “Do I need a sweater in San Francisco today?” and it will display the weather forecast for you. You can then continue the conversation by adjusting the city and it will recognize you’re still talking about weather and give you the new forecast in a different location.

Whether it’s giving you the weather, recognizing that you’re looking for food in a certain district of a city or letting you set your alarm with a few words, Siri really shows off what Apple does best: bringing advanced technology to the mainstream in such a painless and beautiful way. Interacting with your computers through speaking naturally is not a new idea, as anyone who has seen Star Trek believes there is value in this, but when it actually works, it’s an amazing thing. 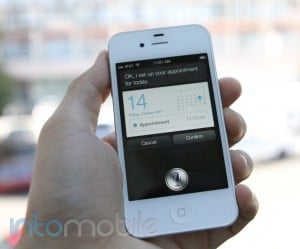 My mind knows that it’s capturing my voice, sending it up to a server to parse that information, comparing it against databases from Yelp, Wolfram Alpha, Google Maps and Apple, or sending that command to one of the existing integrated apps on the phone but the way it works and is presented really does feel like magic. I’ve had my Keanu Reeves moments with it. The problem is that it doesn’t work all the time.

While I appreciate that Siri is packed with humorous answers for things it doesn’t know and this gives it somewhat of a personality, that gets old very quickly and doesn’t make up for the fact that it doesn’t work as it’s supposed to all the time. If you’re like me, you’ll probably talk at Siri for the first hour to test its limits and see its hilarious missteps but will then barely use it because it will be faster, more efficient and more accurate to do it yourself with your fingers. I’ll likely use Siri to show-off in front of people, or to send or hear messages when I’m in the car but I’m not sure if it will work its way into my day-to-day life in a meaningful way. As you can see from the video below, it will misunderstand words and that defeats the purpose of using it.

Voice recognition technology has to be bulletproof for it to really be useful and Siri isn’t even close to that at this point. If this was something that happened once in a blue moon, I’d live with it but I’ve found that it makes mistakes quite often unless you adjust your speech pattern in a very slow, command-driven way. It loses the promise and magic of actually being able to use natural language.

I understand that voice recognition is hard and it’s even harder when you’re aiming to have natural language recognition. When you combine voice recognition with natural language and include context and geolocation, I’m not surprised that Siri doesn’t fully deliver on its promise. In fact, Apple has even said that it’s in beta – normally Google’s jam – and it will only improve with time. I sincerely hope that it does because this could be the starting point for a brand new interaction metaphor with our devices that could become every bit as important as the multitouch interface that the iPhone debuted with. The difference is that Apple nailed multitouch on its first attempt with the iPhone but it hasn’t with Siri on the iPhone 4S.

I’m still not sure why Siri isn’t on other iOS 5 devices yet, as I can buy the argument that the iPhone 4 may not have the processing power to handle it but the iPad 2 definitely does. I sincerely hope that Apple continues to improve on Siri and bring it more of its products because it could be the start of something very special.

The great thing about the iPhone 4S and iCloud's new Find My Friends app is that it lets users share...