When iOS 5 was released a few weeks ago, iPhone users quickly complained about the damage it did to battery life. iPhone 4S owners seemed to be the most vocal, so many believed that it had something to do with the new hardware. Never mind the fact that Apple explicitly mentioned that the iPhone 4S has shorter standby time than the iPhone 4, but it did seem like battery life was truly fickle. On most days, my battery life was OK, but on others it was just awful. Apple acknowledged the problem and promised a software update to fix it.

Apple released iOS 5.0.1 yesterday and users are still complaining about battery life. In fact, the promised fix seems to make it even worse! What gives?

Gizmodo had its readers chime in with their own iOS 5.0.1 experiences, and the responses would lead you to believe that the world is ending. One user said, “The battery dropped from 100% to 89% without ANY use on my 45 minute drive to work.” That is a pretty dramatic drop in battery life!

Why the sudden drop in performance immediately after the update? Probably some corruption somewhere. Historically, iOS updates have always had the potential to screw up battery performance. In the fall of 2008, I remember seeing my iPhone 3G battery life go from 100% to about 20% in just four hours. I quickly learned that the simple solution was to do a restore of the phone and to set it up as new. What this means is you should plug your phone into iTunes, hit restore, and do not restore from back up. Set it up as a new phone.

Sure, you’ll have to deal with logging into all of your apps again, rearranging your apps to taste and waiting for all your music to sync, but 90% of the time this fixes battery life. It has been the go-to fix for any battery drain issues after any iOS software update. I did it for myself and saw a dramatic increase in battery life. 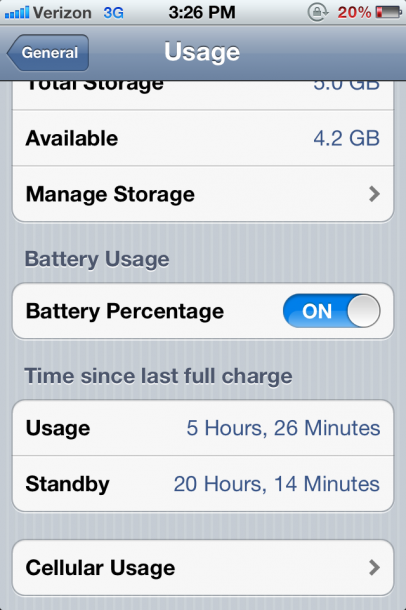 Give it a shot yourself–what else are you going to do on a Friday night, go out and party?–and if it doesn’t work, try these battery saving tips. To take things one step further, go into Settings>Location Services>System Services and turn everything off. And if all else fails, I am truly sorry for you. Get yourself one of these.

It's a rainy Friday where I'm at, so I thought it would be a perfect time to talk about some...