I can’t believe it’s been 10 years since Rockstar Games’ Grand Theft Auto III was released and completely blew away the video game industry with its amazing open-world gameplay, adult theme, and ability to beat the living snot out of anyone or anything that you pass along in the world. And now, something that required an entire Playstation 2, Xbox, or PC is now available on our mobile devices. And it’s not some stripped down version that was made to fit onto our iOS and Android devices, but it’s actually the complete game with improved graphics, a fully customizable user interface, and other enhancements. Did Rockstar just make one of the greatest games even more great? Yep.

In Grand Theft Auto III, you’ll play as a silent protagonist by the name of Claude who was double-crossed by this girlfriend during a heist. Claude is arrested and stuffed in the back of an armored vehicle with other criminals on their way to jail. Luckily, one of the other would-be jail-mates was a somebody to someone whose crew breaks him out, and even more lucky for Claude, leaves the back of the armored vehicle open for you to escape with another criminal. 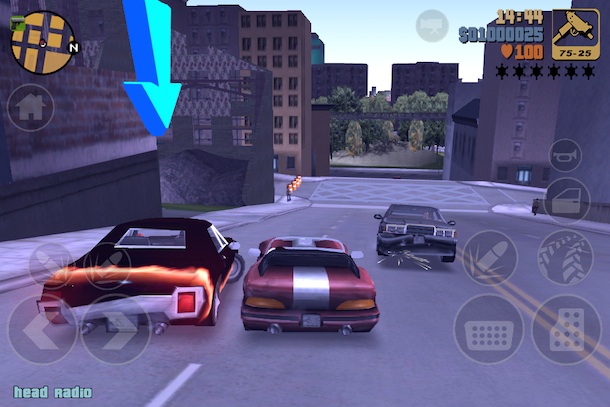 The graphics in GTA III look spectacular when you consider the source material. Everything in the game has been lovingly and painstakingly been brought into HD. Main characters have all of the looks and attitude as I remember them, while regular people on the street have enough detail to them to distinguish between one another. You’ll also experience changes in the environment such as day to night and the occasional rainstorm.

If you’ve been pampered with recent open-world games’ GPS systems, then you’re going to receive quite the reality check with GTA III’s GPS system, or should I say, lack thereof. Not everything ages like a fine wine as you’ll need to navigate your way to your destinations with only the game’s mini-map helping you. Regardless of the lack of GPS, the game makes it easy to recognize where missions are by placing large letters at the edge of the mini-map. 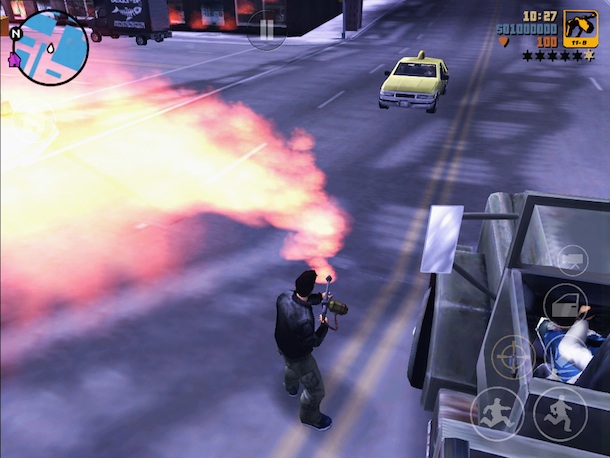 The on-screen controls take a bit of getting used to, especially when you’re being chased by the police, FBI, and army all at once. The great thing about GTA III is Rockstar has given the keys to the game’s control scheme to the player. Don’t like how small certain on-screen inputs are? Resize them to your taste. Are you lefty? There’s a setting for that. Want all of the user interface to be microscopic so you can enjoy all of the wonderful HD detail? Yep, you can do that too. In other words, there should be no complaints about the game’s controls as it’s completely customizable.

FINAL THOUGHT: Ten years after its release, GTA III is as fun as I remember it to be. The sights, sounds, and mayhem have all been successfully brought onto both iOS & Android devices. If your device is supported to run GTA III, then you should absolutely pick up this game.

After the long wait, the Verizon Galaxy Nexus is finally here and we got our hands on the first Ice...