Gameloft’s Dungeon Hunter & Dungeon Hunter 2 certainly quenched my appetite for some hacking & slashing goodness on iOS, but seeing as Gameloft has been teasing not only Dungeon Hunter 3’s release, but also the fact that the game will be another free-to-play title in their ever-growing stable of F2P games. But could a dungeon crawler work in a free-to-play model?

Unlike the previous Dungeon Hunters, Dungeon Hunter 3 lacks any real story. I’m not entirely sure if this is a good thing or bad seeing as I really didn’t pay much attention to the story in the previous Dungeon Hunter titles. Instead, you select one of four classes for your character, their sex, name, and off you go. You’ll play 80 challenges across 4 different worlds, with each challenge increasing its difficulty as well as offering bonus coin and experience points for completing missions within the challenge. Missions can vary from easy tasks such as killing an individual enemy a certain number of times, to some things a bit more time consuming like killing a certain enemy who spawns once during a challenge 5 times using a skill. 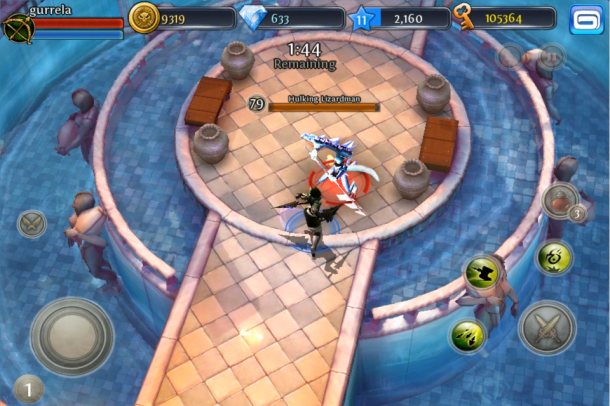 When you complete a challenge, you’ll be given access to a treasure chest that rewards players with more coin and experience points. The only way to open the chest is by unlocking them with a key, which if you ever drop below having 5, will replenish every 30 minutes. If you run out of keys and absolutely need to open a chest, you can then spend jewels to purchase more keys. In fact, jewels can be spent on nearly everything in the game, from gear, to speeding upgrades, to purchasing more potions during combat if you need it. But, unlike most F2P titles, Dungeon Hunter 3 doesn’t make players rely on spending jewels for things as the majority of gear can be purchased or upgraded with coins, which can be obtained through playing the game.

Instead of picking up gear from treasure chests like most dungeon crawlers, Dungeon Hunter 3 relies on a shop that can be accessed between challenges which holds all of the gear that you’ll access for your character. As your character levels up, you’ll unlock access to purchase gear. You can purchase gear one of two ways: by spending coins or jewels. The game also implements an upgrade system for your gear that can be upgraded up to four times. Each time you upgrade something, it’s sent off to the Blacksmith, which means your upgrade won’t be available for a certain amount of time. This serves as another way to get those impatient gamers who need access to their things ASAP to spend jewels to speed up the process. 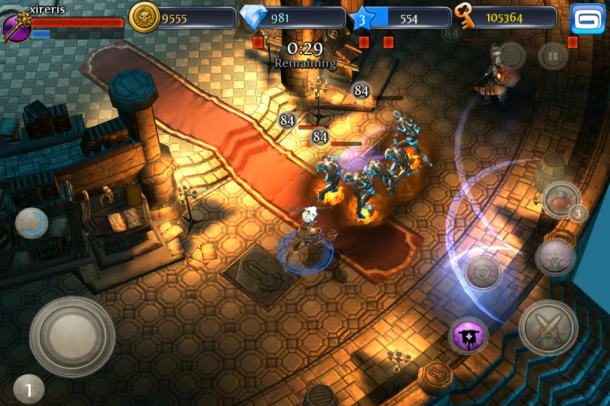 When you get over all of the F2P hoops you need to jump through, the actual game is rather enjoyable as you’ll fight wave after wave of enemies in order to complete a challenge. Characters, levels, and special effects all look great, as is expected from Gameloft. The missions also add a healthy bit of replayability by rewarding players with additional coins and experience points by completing them. I’ve gone back to specific challenge 3 or 4 times just so I could complete the missions involved with it. Dungeon Hunter 3 also includes a daily reward that rewards players with more coins, jewels, or experience points depending on the reward.

One issue I had with Dungeon Hunter 3 was its mission system. The mission would require players to kill a certain enemy, but some enemies weren’t labeled, making it difficult to know which enemy I need to attack a certain way. Being unable to access the missions from the pause menu was also annoying as I wanted to see how I was progressing through the missions. Also, there should be multiplayer in Dungeon Hunter 3, but Gameloft announced it will be available some time in early 2012. The sooner, the better.

FINAL THOUGHT: Being a free-to-play title, I can’t help but think it silly if I recommend this game or not as you won’t lose any money for picking up the game and trying it out. The F2P system doesn’t tie down its players to spend their cash on anything as nearly everything can be accessed through good old hard work. And isn’t the point of playing a game to.. you know.. actually play it? Dungeon Hunter 3 will keep fans of the previous games entertained for hours, while bringing in a new group of gamers who live, breathe, and eat F2P.

Layar, one of the innovators of mobile augmented reality, recently announced the release of its new social experiment called Stiktu,...