The mobile advertising company Fiksu published the results of its research on what it calls App Store Competitive Index, Cost per Loyal User Index, and a general analysis for iOS. In the chart below, there’s a clear spike in app downloads from September to November.

In the latter month, downloads from the App Store reached 5.65 million per day, which is the first time it has ever exceeded the five million mark. Fiksu attributes this to iOS 5 and the rapid adoption of the iPhone 4S — both of which were released in October:

“As expected, and as we’ve seen before with new device launches, new owners’ enthusiasm is high and their appetite for app discovery and engagement is strong. This bears out in the numbers with daily app downloads hitting a new, all-time record peak reflecting heightened competition for rank in the Apple App Store. Additionally, the rapid adoption of iOS 5 – and corresponding app updates – played a key role in this continued escalation in November.”

The Cost per Loyal User Index measures how much it costs brands who market their apps to keep individual users loyal. In this case, “loyal” is defined as any user that opens an app at least three times. In the past couple of months, it hasn’t moved much, dropping to $1.43 in November from $1.47 in October.

App downloads are sure to jump even higher in December, as Fiksu claims, especially with the recent report that over seven million Android and iOS devices were activated this Christmas.

Update: Twitter user @rvdelzen points out that the download figures are actually much higher, as this measures the top 200 free apps only. That’s good news for iOS developers. 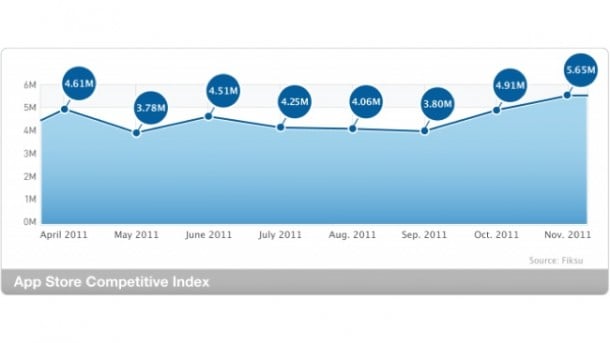 [via TechCrunch, photo via Shutterstock, iQoncept]