It looks like many of you got new smartphones for the holidays and that also means many of you were busy downloading apps. According to Flurry Analytics, you were very busy, as smartphone users downloaded more than 1.2 billion apps from Dec. 25 to Jan. 1.

This shouldn’t come as too much of a surprise, since Flurry reported last week that almost seven million Android and iOS devices were activated on Christmas day. The season of gift-giving is massively correlated with the season of peak app downloads. 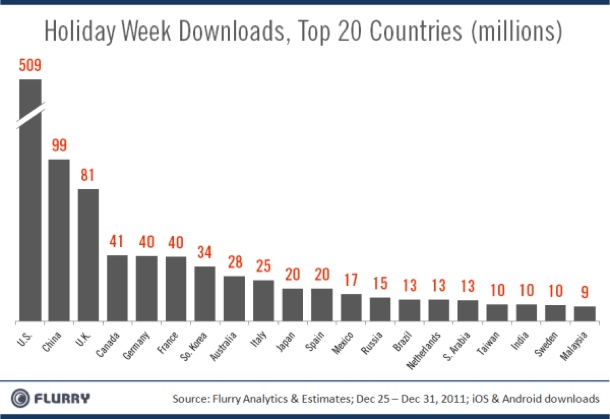 Flurry also monitored which countries contributed most to the 1.2 billion app downloads last week. The U.S. easily takes the cake with 509 million downloads, or 42.3 percent of the share. Next in line is China with 99 million downloads followed by the U.K. with 81 million downloads. After that, Canada drops to 41 million and the rest slowly decline from there.

Thanks to its services being implemented in over 140,000 smartphone apps, Flurry Analytics gathers this information with pretty good accuracy. The 140,000 apps enables Flurry to detect over 90 percent of iOS and Android device activations. It even predicts that the one billion app downloads per week threshold will become the norm moving into 2012.

PostSecret iPhone app closes down due to malicious content

The secret's out. Frank Warren, head of the PostSecret iPhone app, spontaneously announced on New Years' Day that he is...