The number of apps in the Windows Phone Marketplace has just surpassed 60,000 according to the folks at All About Symbian. To put that number into some context, the 50,000 app barrier was passed just 25 days ago. An average of 400 apps are being added on a daily basis, though we don’t exactly know which type of apps are getting the most traction. Does any of this matter though? That’s a question that’s been highly debated in technology circles. From a marketing perspective, saying you have more of anything is usually the easiest way to close a deal. From an actual usefulness perspective, Windows Phone apps leave a lot to be desired. I can say that with a fair amount of confidence since today marks the 7th day I’ve been testing a Nokia Lumia 800. One of the most disappointing aspects of the device is the general lack of killer apps. Compared to my iPhone, which actually reintroduced me to gaming after a long hiatus, Windows Phone is a desert. 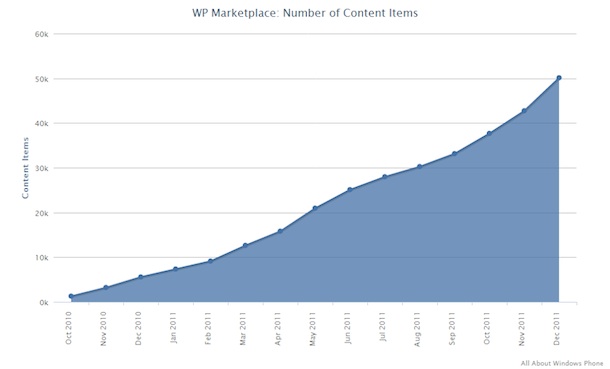 Some might argue that what makes Windows Phone special is that there’s so much functionality right out of the box, and I’m not going to debate that. For most people, yes, they never have to install a single application to enjoy Facebook and Twitter, but there are a lot of gaping holes in the platform. Take PDF reading for example. On Saturday I ordered tickets to “This Must be the Place” and my receipt, which has a special code that I need to enter into a ticket printing machine at the theatre, arrived in my inbox as a PDF file. I was shocked to discover that in order to open said PDF file I had to go to the Marketplace and install Adobe’s free PDF reader to do that. That’s incredibly unacceptable. Forget about the iPhone for a second, my old Nokia smartphones running Symbian could open PDF files.

That’s just a taste of the review I plan on publishing at some point next week.

So you want to get into the Windows Phone game but don't want to commit on two-year carrier contracts? On...