Virgin America tried to do a cool thing when the company named an airplane “Stay Hungry, Stay Foolish.” The name was a tribute to Steve Jobs who used the quote in his renowned 2005 Stanford University commencement speech. It’s a nice gesture, but, unfortunately, it’s not 100% correct. 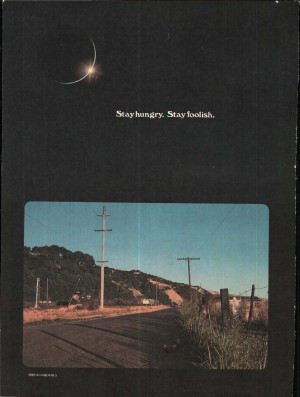 You see, that quote, “Stay Hungry, Stay Foolish” is attributed to Jobs, but he was not the source. Yes, he used the quote in his Stanford commencement, but  it was originally from The Whole Earth Catalog. The catalog was produced by Stewart Brand who used it to educate people and give them the tools to “find his own inspiration, shape his own environment, and share his adventure with whoever is interested.”

The pages of the catalog were filled with useful reviews and vendor contact information for everything from shelter and land use to communications. Jobs talked about this Catalog and compared it to Google, which arrived online over 30 years later. The catalog ran from 1968 to 1974 when it wrapped up its last edition with the now famous quote on the back cover.

Though the attribution may be wrong, the sentiment is still genuine. The name was entered into an internal plane naming competition by a Virgin America employee  who wanted to remember Steve Jobs. Even though it didn’t originate from Jobs, he is the one who made it a household phrase and should get some credit.

But if you ever see the “Stay Hungry, Stay Foolish” plane in real life, don’t forget about Stewart Brand, who’s still alive and fighting for the environment and technology from his home in California.

If you have an iPhone 4S like me, you probably spent the weekend jailbreaking it and testing out new jailbreak apps and...