NimbleBit, who are the developers of the hugely popular freemium title, Tiny Tower, has recently taken notice that Zynga has just released a game that’s deeply inspired by theirs called Dream Heights. So, as any rational person would do when their hard work is being completely ripped off by a much larger and more successful company, they decided to write Zynga a little letter.

The letter from Nimblebit to Zynga congratulates the company for their release of Dream Heights, which they point out Zynga must be big fans of their Tiny Tower game. Nimblebit goes on to say they look forward to inspiring Zynga for their future titles and points out the huge differences between the size of the Nimblebit team, which is made of 3 people, to Zynga, which is 2,789 strong.

What makes this story even more interesting is the claim by NimbleBit’s co-founder Ian Marsh that Zynga attempted to acquire them. NimbleBit’s other co-founder, David Marsh, took to his twitter feed to vent his frustration by claiming NimbleBit has been “Zynga’d” and also saying “Even when you refuse to go work for Zynga, sometimes you end up doing work for Zynga anyway.”

I can’t blame Nimblebit to be upset with Zynga seeing as the company has made an absolute fortune on FarmVille and other clones of that game. A game like Tiny Tower was an absolute labor of love by the team and to see something they worked so hard on to then be stolen by a much larger and already profitable company, I’m just surprised the letter wasn’t full of expletives and threats to Zynga’s dog mascot. 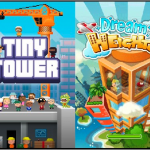 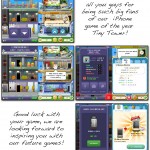