Google and Apple’s mobile operating systems continue to dominanate, as Android and iPhone accounted for over 90 percent of smartphone sales, according to the latest research from The NPD Group. The little green robot garnered 48 percent of the smartphone market during last quarter, while iOS handsets took in 43 percent.

The study also shows that Android devices lead the iPhone when it comes to first-time smartphone buyers. In the study, Android trounced the wildly popular iOS phone by grabbing 57 percent of first-time buyers, while the iPhone reported only 34 percent during the same period. This is most likely due to the vast array of choices when it comes to Android handsets and price points.

The research also showed that smartphones continued to climb in Q4 2011, reaching 68 percent of the total mobile phone market, which is an increase of 18 percentage points since Q4 2010. To no one’s surprise, the latest iPhone (iPhone 4S) came in as the number one selling phone. The top five handsets for the quarter included the Apple iPhone 4S, Apple iPhone 4, Apple iPhone 3GS, Samsung GALAXY S II and the Samsung GALAXY S 4G.

All in all, this study isn’t bad news for Apple but it’s horrible news for other Android phone makers. Samsung is proving to be head and shoulders above the rest of the manufacturers out there when it comes to making Android devices. Other companies will have to adjust in order to stay relevant. 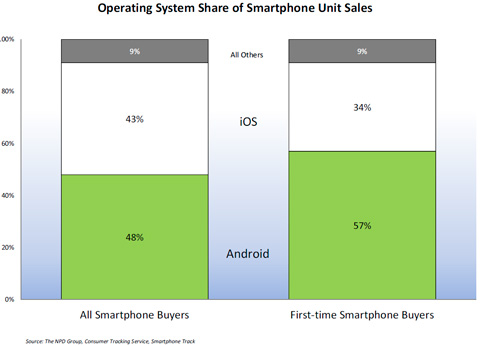 Super Bowl: Mobile searches up during the game [Infographic]

The Big Game is over and New York Giants fans are probably still celebrating but Google is back to work,...