China, the world’s second largest economy comprised of over a billion people, hasn’t been very nice to Nokia. When the Finnish handset maker reported their Q4 2011 financial results late last month, they said that handset sales in China fell 33% year on year to less than 15 million units. What’s a phone maker to do? We know, how about launching the flagship Lumia 800 on a local operator?! That’s exactly what Nokia plans on doing according to three photos that have leaked on Weibo, the Chinese version of Twitter. Said images show the Nokia Lumia 800 running on China Telecom, the third largest wireless operator in the country. China Telecom uses CDMA instead of GSM, so this image also suggests that Nokia can potentially bring the Lumia 800 to Verizon, though to be perfectly honest we think Americans would rather have the larger Lumia 900 that’s going to hit AT&T in March. 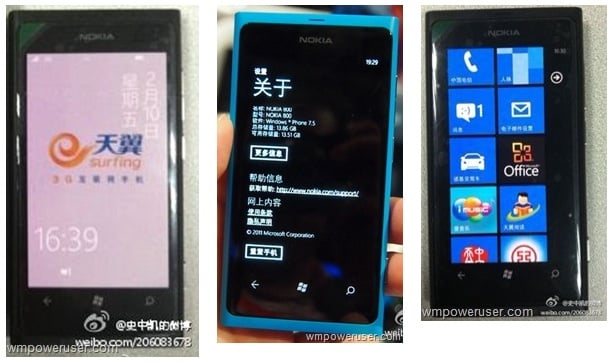 Anyway, why are these photos important? Because sales of Nokia’s Windows Phones haven’t exactly been stellar. Nokia announced that they’ve shipped 1 million of them as of January 26th, which means less than 650,000 were sold in the crucial holiday quarter. It’s not like the Lumia 800 was on sale in just one country either, it was available in all five of the countries that make up Western Europe. With the Lumia 800 going on sale in China, those numbers will obviously go up. Now we’re just missing two pieces of critical information: price and date. Will China see Nokia’s smartphone by the end of March, also known as the first quarter? If so, will it be priced to move in China?

China is an area where Apple, Samsung, and others have been investing a lot of resources in. Likewise Nokia’s been creating operator variants of their Symbian devices for the Chinese market for years. What does Nokia have to do to crack that market though and regain market share?

We're just two weeks away until Mobile World Congress kicks off, the largest mobile exhibition on the face of the...