Android has taken over in the United Kingdom as the #1 smartphone operating system in terms of market share. Kantar Worldpanel ComTech measured smartphone usage between January 2011 and January 2012 to find that Android had a 36.9 percent share while Apple’s iPhone had 28.5 percent.

In fairness, this should be expected. It technically compares software with hardware and Android is installed on hundreds of phones while iOS is only installed on the iPhone, which is divided into five different models — two of which Apple has discontinued. Keeping this in mind, it’s understandable that Android has more mobile OS market share than iOS in the United Kingdom. 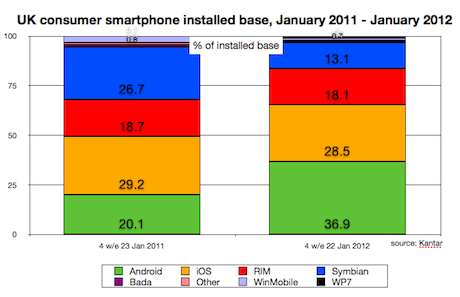 In January 2011, the iPhone dominated the market with 29.2 percent and Android only had a 20.1 percent share. Interestingly, neither iOS nor RIM dramatically dropped during the course of 2011, indicating customer loyalty to both brands. Instead, Android spiked up to its current 36.9 percent share mostly at the cost of Symbian. Now that Nokia has adopted Microsoft’s Windows Phone 7 OS, Symbian’s market share will continue to fall in 2012 as Windows Phone likely rises.

Smartphones in general are growing in popularity as well in the UK. 50.3 percent of the British population owns a smartphone. “For the first time ever, you are now in the minority if you don’t own a smartphone,” said Dominic Sunnebo, global consumer insight director at Kantar Worldpanel ComTech.