Apple just released iOS 5.1 as a free software update for iPhone, iPad and iPod touch. It includes some small new features and bug fixes, but nothing major.

It was unveiled today very briefly at the iPad 3 event, but Apple didn’t talk about much besides the fact that it included support for Siri in Japan. That’s nice, but pretty lame if you aren’t Japanese. Now we have a few more details.

The big one is that photos can be deleted from Photo Stream! This simple feature, that should have been added from the very start, lets you reverse any photo that was automatically uploaded to the stream, so that photo you regrettably took last night doesn’t end up on all of your devices everywhere you go.

Next on the list of importance are three camera features. The first was previously rumored, and it’s that the camera icon remains visible on the lock screen right next to slide-to-unlock function for easy access to the camera. Previously you had to double-tap the home button to get to it. The other camera-related additions here are a redesigned Camera app on the iPad and face detection.

Basically, iOS 5.1 is filled with enhancements rather than full-blown new changes. Aside from the aforementioned improvements, there’s also Genius Mixes for iTunes Match subscribers, improved audio in iTunes movies and TV shows, bug fixes for battery life, podcast controls on iPad, and a couple of other things.

If you have iOS 5 already, you can get the update wirelessly by navigating to your Settings. If not, tether up to iTunes and get downloading! 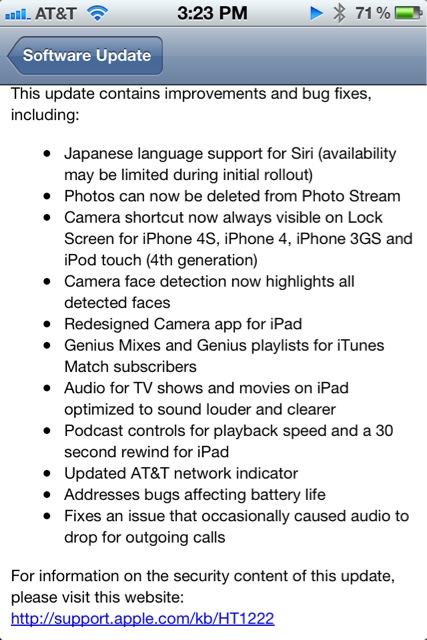 Apple launches iPhoto for iPad, $4.99 in the App Store

Apple unveiled the long-awaited iPhoto app. It's available for $4.99 in the App Store for iPod touch, iPhone, and iPad...