As you’re probably aware, there’s been a lot of talk about a future iteration of the iPhone getting a larger display dating back for a few years now. So far, it has yet to happen. Apple clearly has never seen a need to keep up with the gigantic Android phones on the market. Plus, any rumors of moving to a larger display are normally shot down because Apple would then have to sacrifice pixel density and apps would have to be rewritten. Blah blah blah.

Every time these rumors have flown around, I’ve remained relatively silent about them. I always just dismissed them as bullshit Apple rumors yet again that don’t have any logic. That is until today when one person took to The Verge forums to post his idea of how an iPhone 5 with a 4-inch display would be plausible. To my knowledge, it’s the first the time in the history of the 4-inch-display rumors that someone has come up with a system that actually makes sense.

Don’t be fooled by my enthusiasm, though. I’m still not convinced. It brings me to the question I’m certain the folks at Apple who work on new features in upcoming iPhone models ask themselves every day: is this even necessary?

Just because Android devices commonly incorporate displays of four inches or larger does not at all mean Apple is feeling pressure to do the same.

That’s always a good reason to not do something. Apple doesn’t need to make the display larger. Oh, but Android devices have larger displays so obviously Apple needs to follow suit, right? Wrong, wrong, wrong. The fact of the matter is the iPhone is selling way better than any single Android phone. The sales figures aren’t even in the same league. No matter what Apple does or doesn’t do in the next iPhone, they will still sell like hotcakes.

If Apple made the sixth-generation iPhone out of cow manure, the extreme Apple fanboys would find a way to explain how the stench is revolutionary. Sales aren’t a problem and they almost certainly would not take a toll if the display in the next iPhone remains at 3.5 inches.

The only real exception to the possible need for a bigger phone is LTE. The large size of LTE chipsets are forcing other manufacturers to make their phones bigger — this is true, but Apple has done some pretty incredible stuff. The new iPad fits LTE in just fine. Yes, it’s much bigger than the iPhone, but if you’ve ever seen the teardown of the iPad 2 you’ll know that thing was packed to the gills. Aside from a practically indistinguishable increase in thickness, the third-generation iPad has stayed the same.

Another interesting thing I’ve noticed is that the people who are complaining about needing a larger display on the iPhone don’t actually own one. It’s most Android users that say things like “Well if the iPhone had a larger display I’d consider switching to iOS.”

I know a lot — and I mean a lot — of people who own iPhones. No one has complained that the display is too small. That’s not to say that there aren’t people who would prefer the larger display, but I’d argue that’s only because they see friends or family with an 4.3-inch Android device and think “wow, that looks cool.” “Cool” doesn’t necessarily mean “beneficial.”

On the flip side, it seems there’s plenty of people complaining about the display on their Android phone being too big. When the display gets large, the phone has to get larger. As a result, it becomes less practical or comfortable to hold with one hand or over long periods of time. If you’re one of the few that does enjoy a larger device, good for you; you’ve found love in Android phones. Let’s remember that Apple’s goal has never been for every single person on Earth to own an iPhone nor has it been to dominate mobile market share.

I give kudos to The Verge forum user for coming up with a practical formula for increasing the size of the iPhone’s display: keep the width the same and make the display taller for an aspect ratio of 9:5, 1152×640 resolution, and diagonal size of 3.99 inches. That way, apps using Apple’s standard UI could just push the top navigation bar up and make more room for content. This makes sense, but there’s plenty of apps in the App Store that don’t use the standard UI, namely games.

For this, he claims that Apple could just leave them at the size they are and fill in the missing content on the edges with black bars until the developer decides to redesign the app. Here’s how Angry Birds would look: 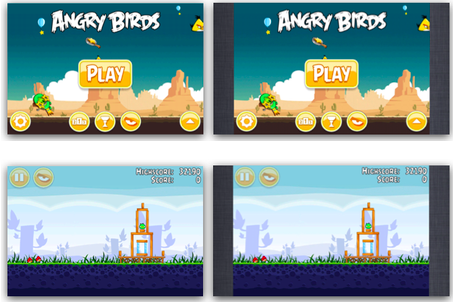 Fine, but this means developers would have to once more alter the graphics on these apps. Only this time it would be much harder because it’s not simply a matter of pixel doubling anymore. Plus, it’s odd that games would be the hardest to modify for the new display when games would benefit most from it.

I’m not ruling this method of resizing apps out, but I am pointing out that it would be hard on developers and certain apps would look strange with the black bars on the sides for the time being that they are not updated.

I’m very curious to read about your input on a 4-inch iPhone, so be sure to weigh in below with your comments.

The HTC One S is one of the most well-reviewed Android devices to date. IntoMobile gave it a 9/10 overall...