While it certainly comes as no surprise that Apple sells more iPads than any other tablet maker combined, a new report out of Chitika suggests that Apple’s iPad commands an even greater market share when it comes to internet browsing. Chitika serves ads to several sites around the web, and selected a sample of the hundreds of millions of impressions served to tablet users to measure web traffic market share.

Web traffic from Apple’s iPad was down slightly from Chitika’s May report, but still comprised 91.07% of the market. Apple’s next closest competitor was Samsung, with its entire line of Galaxy Tabs amounting for 1.77% of all web traffic for the month. Among the eReader/tablet hybrid devices, Barnes and Noble’s Nook series edged out Amazon’s Kindle line 0.85% to 0.71%. 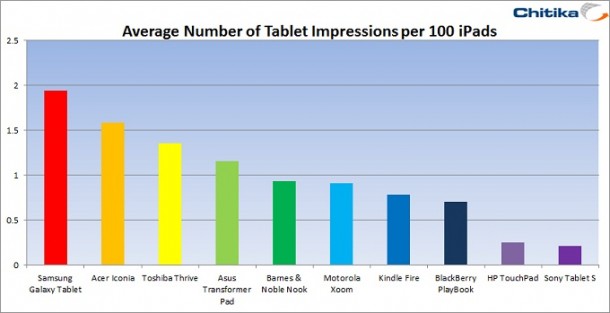 The above image paints an even clearer picture, showing how many tablet impressions (pageviews) per 100 iPads for each of the competition. While not necessarily unexpected, the results are impressive and indicate that owners of Apple’s iPad are consuming more web data than all other tablet owners combined, and by a pretty significant margin. It could indicate different use cases associated with the different tablets; as someone who owns both an iPad and an Android tablet, I notice that I personally do a lot more web browsing with the iPad than the Android tablet, which I primarily use for gaming and certain applications. This latter scenario wouldn’t fall under the purview of Chitika’s study.

With Windows 8 around the corner and a strong push towards Windows-based tablet computers, we could see the landscape change very soon. The tablet market is still ripe for the picking, with less than 20% of customers owning a tablet computer, and a tablet running a familiar Windows operating system rebuilt for mobile consumption could very well propel many users into the tablet market.

One thing’s for sure, tablets are here to stay, and the iPad will continue to enjoy widespread success in this arena for the foreseeable future.

Earlier this week, Apple announced some shiny new features for its upcoming iOS 6 platform, set to release this fall...