The Day 1 keynote of Google I/O 2012 gave us the first look at what the search giant has been working on since it released Android 4.0 Ice Cream Sandwich late last year. What we got was the expected Android 4.1 Jelly Bean – a smaller update that builds upon Android 4.0 and brings in some interesting and exciting new features. From notifications to Voice Search, the items that Google did update are well thought out. We’re going to break down some of the salient features for you, so read on. 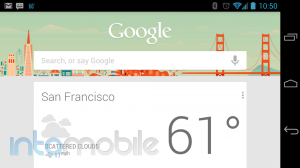 Google’s enhanced search is the obvious answer to Apple’s Siri. While we’ve seen competitors like Samsung’s S-Voice, Siri still seems to be the cat’s meow. That is, until now. The demo that was shown off at I/O proved that Google is way ahead of any competitor that has implemented a voice assistant into a smartphone OS. Google Now is accurate, fast and presented in a simple way. Plus, its voice isn’t nearly as annoying as Siri.

We recently saw Techno Buffalo pit Jelly Bean’s new Voice Search capabilities against Apple’s Siri, and let’s just say that there is a new king in the voice search space.

Besides the revamped search UI, you’ll also find a new card-like feature called Google Now. These cards work in the background and will automatically populate your notification panel with information relevant to where you are and what you are doing. For example, you can automatically see how long it will take for you to go home. Unlike its competitors, this estimate isn’t a wild guess based only on mileage. Google Now even figures in traffic conditions and nearby transit stops into your ETA. There are also cards for your local weather, as well as nearby restaurants. All of this is done with no effort on your part. If you don’t like Google dumping information into your notifications, you can turn off this feature.

Now, some might believe this is just plain creepy, and in many ways, it is. That said, if you’re an Android user, Google already knows where you are, where you eat, where you spend most of your time, and other places you frequent. Google Now just lets you benefit from the data that it is collecting from you. 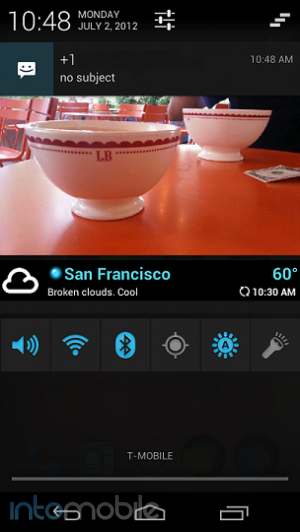 Personally, the new tweaks in notifications are my favorite part of Android 4.1 Jelly Bean. Now, when someone shares a photo, either through MMS or something like Google+, a high-res photo will appear in the notification panel. If you have multiple notifications that are cluttering up your panel, but don’t want to dismiss them, you can shrink or expand the picture notification by swiping said notification upwards with two fingers.

This functionality also extends to email notifications, where you’ll either be able to see the first few lines of the email if you only have one, or the list of subjects in the emails if you have many. Many other notifications have extra options now, too. For example, when you take a screenshot, a (washed-out) version of the screenshot will appear in the notification panel and when expanded, you’re given the option to share it immediately.

Furthermore, if you hold down (long press) on any given notification, you have the option to see said notification’s application information. This came in handy recently when a certain application was putting spam-like notifications on my panel and homescreen. One long press and this small feature allowed me to single out the culprit.

While we saw the ability to resize widgets in Android 4.0, Jelly Bean takes it up a notch.  When you move the icons around in a folder on ICS, other widgets and icons move out of the way. The same thing happens in Jelly Bean when you move a widget around on the homescreen. In this scenario, other widgets and icons move out of the way and Jelly Bean lets you drop the widget in the area you want. Another interesting tweak is the ability of Jelly Bean to automatically resize a widget. This occurs when there are too many icons or other widgets to accommodate the size of the widget you’re moving to a homescreen panel. Rather than prevent you from placing a widget, Jelly Bean will automatically resize it to fit in the available area.

There is also a new widget called What’s this Song which provides a Shazam-like feature. When a song is playing, you just need to tap on the widget, and an animation that signifies the song is being recognized will appear. If it’s recognized successfully, Jelly Bean will display the name of the artist and song, as well as a link to the Play Store to buy it. Clever, Google. Clever.

This is a simple feature that eliminates the need to dive into the gallery application to share a photo. We’ve loved Android Beam ever since Google announced it in Ice Cream Sandwich, but the feature has always been so limited. Not only is it found on just a few NFC-enabled phones, it only lets you share small amounts of data. Android 4.1 brings Beam up a step, and now lets you send pictures in a manner that’s similar to Samsung’s S-Beam.

Like S-Beam, the enhanced Android Beam allows users to send photos or videos by initiating a Bluetooth connection (instead of WiFi Direct connection) to other Android 4.1 users. The feature doesn’t extend to Android 4.0.x devices, unfortunately, but hopefully that will change in the near future.

Google also announced that users can now pair Bluetooth devices that are NFC enabled to your phone by just a tap.

Like Android 4.0 Ice Cream Sandwich, Jelly Bean has its very own easter egg that you can find in the settings menu. Just go to “About Phone” and tap on “Android 4.1” below the Version number. At that point, you’ll be presented with a large red jelly bean. Long pressing on the jelly bean will present a screen with floating jelly beans that you can flick around on the display.

With Android 4.1 Jelly Bean, Google has shown that a great update can be provided without reworking the entire OS. Jelly Bean brings out the best in Ice Cream Sandwich, and brings along some great new features to let the OS shine. With Android 4.1, the OS is more user-friendly and more polished than ever.